Surgeons are medical doctors or doctors of osteopathy who specialize in using surgical operations to treat diseases, physical conditions and injuries. They are among the most highly educated and highly compensated of all professionals in the United States. Surgeons, like all physicians, must typically complete a bachelor's degree program in a pre-medical field prior to entering medical school. After completing four years of medical school, a surgeon candidate must complete a rigorous period of paid residency. First-year residents are commonly referred to as interns. Salaries for surgeon interns vary from program to program. 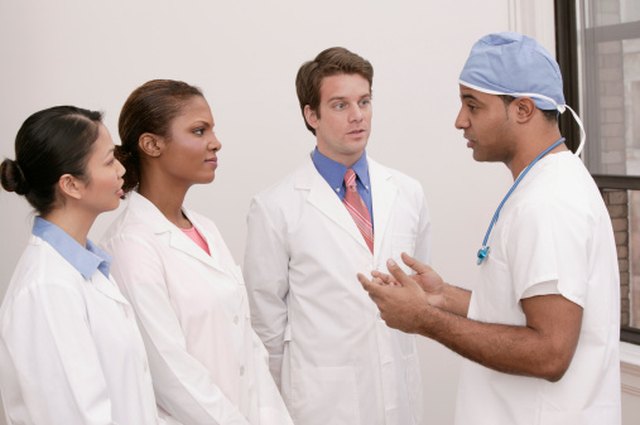 Surgeon interns learn from on-the-job training under the direct supervision of a mentor surgeon.

The mean annual income for surgeons in all fields of specialization from across the United States was $225,390 as of May 2010, according to the U.S. Department of Labor's Bureau of Labor Statistics. The national average surgical resident salary was $56,000 per year as of June 2011, according to the Simply Hired website. First year surgical residents, typically referred to as surgeon interns, earned an average annual salary of $49,000 as of June 2011, according to Simply Hired.

Salary is only one component of a surgeon intern's total compensation package. Different programs offer additional benefits that may add significantly to the value of the program. The Marshfield Clinic offers interns 15 paid vacation days per year in addition to seven paid days to attend professional conferences. Interns at Oregon Health & Science University receive an allowance to help defray the cost of university sponsored group insurance programs. Interns at the University of Texas Southwestern Medical Center at Dallas have their malpractice insurance provided by local hospitals.

How Much Does a Occupational Therapy Assistant Make an Hour?

The Average Salary of a First Year R.N.