Football Bowl Subdivision (formerly called Division 1) officials earn compensation based on their experience and game "importance." Rookie officials, as you might expect, make the least whereas veterans make the most. They do not earn salaries; instead, they are paid per game. The top football conferences, including the Southeastern Conference, pay their officials the highest compensation in the FBS. In the SEC, football officials are typically paid between $800 and $3,000 per game. 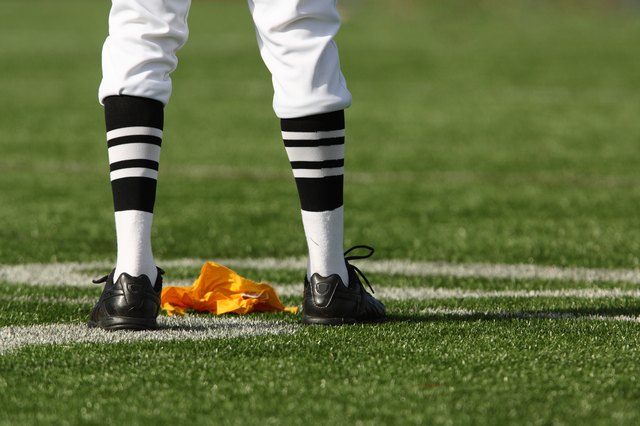 Most top FBS conferences, such as the SEC, use teams of seven officials for each game. The NFL uses the same number of officials per game. The referee is the "crew chief" or head official, with the other six team members responsible for specific areas of the field. The referee usually earns the highest compensation as the leader of the team of officials. Because the SEC is one of the two or three highest "profile" football conferences, many of its "minor" officials earn more than referees in smaller, lower-revenue conferences. Although people often call all officials "referees," there is really only one referee for each team of officials in high school, the NFL and college football.

Rookie Officials in the SEC

The SEC, like other FBS conferences, has pay scales that vary with referee experience and game importance. FBS conferences with at least 12 members have a championship game to determine the conference winner of each football season. Officials selected to work the championship game earn extra compensation, which includes a pay scale difference and monies for travel, lodging and meals. The SEC offers one of the highest referee pay scales of all the FBS conferences. However, those referees with the most experience still earn more than a comparable referee with less time served.

How Much Does a Midwife Make a Year?

How Much Do Boxing Referees Get Paid?

How Much Do Professional Referees Get Paid Per Game?