The Salary of an Audio Book Narrator

Audio book narrators record their readings of books to be listened to by the public. In recent years audio books have become popular for those who love to read but do not have the time to hold a book in their hands. Generally, audio book narrators are actors with an acute ability to bring the words and characters on a page to life. Salaries for an audio book narrator vary depending on the publisher, publication and experience of the talent. 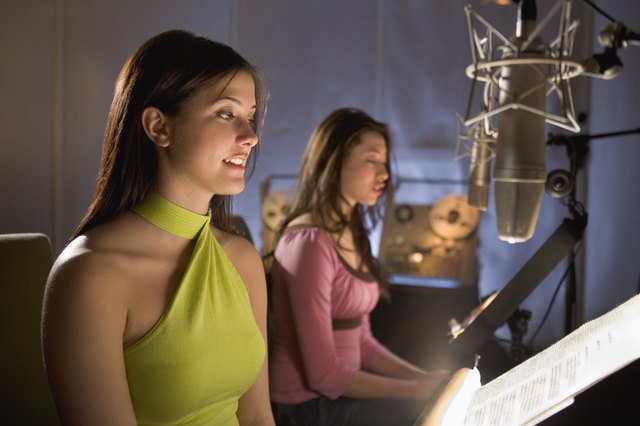 If you are a new narrator, you are likely to be paid an hourly salary that ranges from no pay to as much as $50 per hour for small publishers. Medium-size and large-size publishers may pay between $100 and $350 per hour. Many new narrators entering the field are part-time and do not work often because of competition from more experienced or well-connected audio book narrators. Also, most new narrators do not receive pay based on standard rates.

According to Voices.com, a leading website for voice talent, the standard rates for audio narrators are as follows: $125 per hour for recording time and $500 per finished hour (which is equal to the actual reading time for a book, e.g. a book with a reading time of five hours would require an equal amount of finished hours). Additionally, some narrators are paid by page or by word. Per page, the rate is $125 and 1 to 5 cents per word, according to Voices.com.

If you are a new narrator and a member of AFTRA (American Federation of Television and Radio Artists), the union for audio book narrators, you will be paid $139.25 per hour. Thus, for a finished audio book of eight hours, you would earn $1,114. Veteran or experienced narrators can expect to earn $168.25 per hour or $1,346 for a finished audio book of eight hours. Conversely, non-union narrators with experience may earn between $90 and $250 per finished hour. However, it is more typical for the ceiling to be $150 per hour for a non-union narrator.

How Much Does a Cartoon Artist Make?

The Average Salary of a Hip-Hop Dancer

How Much Money Do Graphic Novelists Make?

The Average Salary of a Back-Up Singer