The Average Salary of a Studio Musician

A working musician in today's world typically draws his salary from a variety of jobs including, but not limited to, live performances, teaching, transcribing and arranging, and often from studio recording. His salary varies greatly depending on his level of training, experience, location, and the number of studio recording sessions for which he is hired. Some musicians can even make a living from studio sessions alone, but for most it is only a percentage of their income. 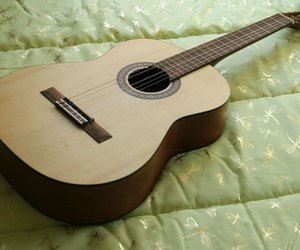 A successful studio musician can have a lucrative career.

To find studio work as a musician, you need to be in a city that not only has a decent number of recording studios but also a reasonable number of commercial and professional music endeavors. It is no surprise that the most active communities in the United States for studio musicians are (and have been for a while) New York City, Los Angeles and Nashville. However, studio musicians can also find work in virtually any city with a population of 400,000 or more. The top-paying states in the United States for studio musicians are California, Arizona, West Virginia, New York and Connecticut, which average wages of between $33.27 and $35.02 an hour, according to the Bureau of Labor Statistics.

According to the Bureau of Labor Statistics, which categorizes studio musicians as "Musicians and Singers" for occupational employment, musicians who "entertain on-stage, radio, TV, film, video, or record in studios" earn an average hourly wage of $29.10. Most large cities in the U.S. have more than one firm or business that regularly records commercial music such as jingles, commercials and radio programs. Most of them have a standard list of studio musicians to call on. Another very common job for studio musicians is to record with a solo artist. These jobs are typically obtained through word of mouth or through social networking sites. Other projects are simply artistic collaborations, although these roles are often unpaid.

Most studio musicians set their own rates and often charge by the hour. This could range from as little as $25 an hour to $200 an hour or more. Another common method of payment calculation is to charge per song. This can range from $50 per song to over $500. A third and slightly less common approach is to quote a set price for the whole recording session, but this is often calculated based on the number of songs or hours the musician will spend on the project. Some studio musicians who charge by the hour or per song also require a minimum payment such as the equivalent of four hours of recording or four songs.

No objective method exists to define what a studio musician should make. However, a session player can justify his rates based on training, such as a college music degree, and experience.

Figuring Out What Freelance Rates to Charge