What is the Difference Between a Row House and a Town House?

Buying or renting a town house has several benefits, including a relatively lower price when compared to detached single-family homes of the same size and location. The differences between a row house and a town house are minimal. The terms "row house" and "town house" are often used interchangeably, although builders, real estate professionals and organizations that deal with housing matters might note distinctions and refer to the structures by different names. 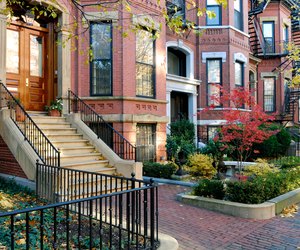 What is the Difference Between a Row House and a Town House
credit: jorgeantonio/iStock/GettyImages

A definitive feature of row housing distinguishes it from a town house. Row houses line a street in a row, whereas town houses may be situated or grouped in different layouts within a development. Row-houses are two or more identical or nearly identical units that share a common wall on one or both sides of the unit. Row house demand increased in the early 19th century through the 20th century and provided single-family and multi-family functionality. The tall, narrow side-by-side structures were relatively inexpensive and quick to build.

Town houses were predominantly established in urban cores or metropolitan areas as second homes for wealthier households who also owned homes in the countryside. Town houses had two or more stories and required less land to build upon. Their tall, narrow construction allowed more homes to fit within a limited area, and they made both economical and practical sense in crowded towns. Modern town houses belong to larger developments, have two or three stories and a homeowners associations, or HOA, that governs common-area upkeep.

Unlike duplex, triplex or fourplex properties, which are multi-family properties on a single lot or parcel under the same ownership, each row-house unit is individually owned real estate. Unlike town house ownership, however, row house ownership doesn't necessarily entail a homeowners association, or HOA, to manage other areas of the development. Besides the shared wall between row-house owners, there may be no further commonly owned components. For example, Southern Cross Underwriters, which insures homebuilders, makes this distinction between row houses and town houses and incorporates it into their policies.

Depending on Who You Talk To

The differences between a town house and row house may be less evident depending on who you talk to. The Department of Housing and Urban Development, and state housing organizations that work with HUD, also may not distinguish between row houses and town houses. Forms for such government organizations use the two terms interchangeably under housing type categories.

Will a Townhome Qualify for FHA?

The Pros and Cons of Town Homes

How Much Money Do I Need for a Down Payment?

How Big Is a Single-Wide Trailer?