Commercial aircraft pilots are highly skilled professionals who fly airplanes or helicopters for business purposes including the transport of cargo or passengers, crop dusting, aircraft testing, traffic monitoring, firefighting, and emergency rescue and evacuation, according to the U.S. Department of Labor's Bureau of Labor Statistics. Commercial airlines typically employ at least a two-person pilot crew including the captain and the first officer, or copilot. Commercial airline pilots are well compensated for their services. 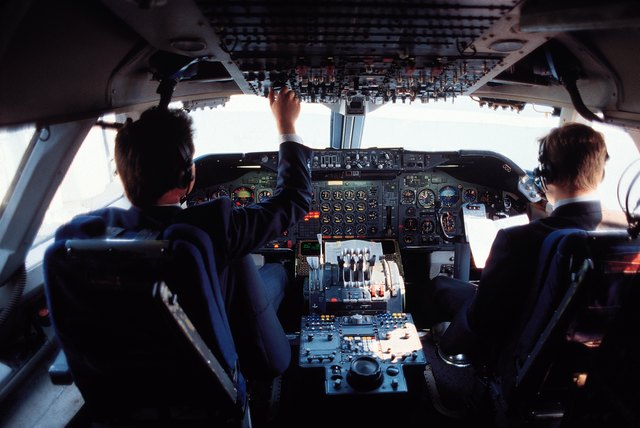 Difference in Types of Pilots

A commercial pilot just starting out can expect to earn as little as $20,00 during her first year on the job, according to the BLS. On average, though, the bottom ten percent earned around $36,850 in 2013. The top ten percent, meanwhile, earned over $136,890.

Job growth for commercial pilots is expected to keep pace with the economy, growing at approximately 9 percent through 2022, according to the BLS. Jobs for airline pilots meanwhile will see a decline by 7 percent. Most of the opportunities will be with small regional carriers.

Salary is only one component of a commercial airline pilot's total compensation, according to the BLS. Most airline pilots receive a per diem allowance for time spent away from home. They may receive a uniform allowance for the purchase and maintenance of their uniforms. Immediate family members typically are provided free accommodations on company airlines. Additional benefits may include paid time off, bonuses and employer contributions to health and life insurance as well as government and private retirement programs.

The Salary of Flight Attendants for Spirit Airlines

How Much Does a Commercial Pilot Make a Year?

The Average Salary of an Airline Steward

The Basics
Taxes
By: Joseph Jacob

The Definition of Commercial Auto Insurance

The Basics
Cars
By: Laura Gittins