What Is the RIA Test?

Radioimmunoassay, or RIA, is a blood testing technique used to detect the presence of antigens, like insulin and other hormones. The test dates back to the 1950s, however many new applications for RIA tests have been developed since then. Because it uses radioactive materials, RIA testing requires specialized equipment, as well as knowledgeable and careful handling. While it is a very accurate method of testing, it is also relatively expensive. 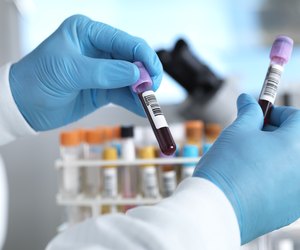 What Is the RIA Test?
credit: Westend61/Westend61/GettyImages

A trained lab technician prepares a sample by mixing a fixed, known quantity of an antigen labeled with a radioactive isotope, often one of iodine, and a fixed amount of antibody. The radioactive antigen forms a chemical bond with its corresponding antibody.

The RIA technique can also be used for testing the presence of illegal narcotics in the bloodstream. Because it is relatively expensive, RIA is more commonly used by large public agencies, hospital systems, the federal government and the military. Private, smaller drug-screening firms generally use less expensive, although less accurate, methods. Banned or illegal substances cannot be masked in any way from the RIA method.

The Basics
Real Estate
By: MayankJ