How to Convert U.S. Dollars to Euros

The euro is the official currency of 19 European countries. When doing financial transactions in these countries -- such as shopping or paying a hotel bill -- you may want to know the actual cost of a good or service in U.S. dollars. The calculation can be done using an online currency conversion calculator or figured out manually. Either way, the converted value represents a close estimate of what the actual cost will be, because the official conversion rates refer to bank-to-bank transactions only. On bank-to-consumer transactions, you typically pay a fee, such as the foreign transaction fee applied to a foreign currency purchase. 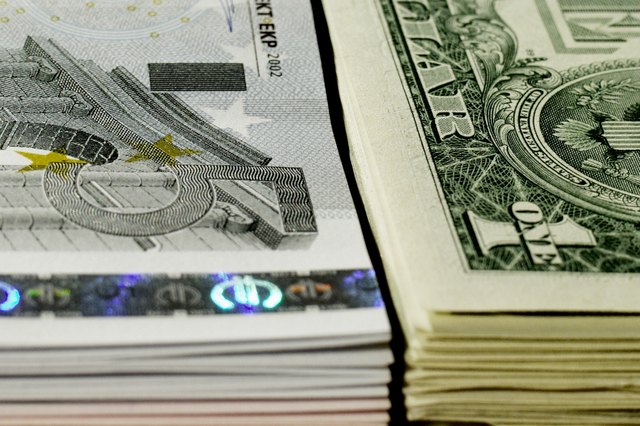 The euro is the official currency of the European Union.
credit: Medioimages/Photodisc/Photodisc/Getty Images

Enter the number of dollars into an online dollars-to-euros converter, such as the one found at Oanda. Or use a search engine such as Yahoo! or Google by simply typing in the amount of money you want converted. For example, if you are converting $250, enter "How much is $250 in euros." You can obtain the exchange rate between banks -- the rate when one bank deals with another bank -- from an online finance site such as Yahoo! Finance. Your own bank can give you the bank-to-consumer rate, which is the rate at which the bank will exchange dollars to euros for a customer. This typically includes some type of fee. Some websites, including Oanda, have the option to use a conversion rate showing a 1 percent to 5 percent fee. If you have the conversion rate, the calculation can be done manually. For example, as of January 17, 2015, the bank-to-bank rate is one dollar converting to approximately .86 euros. To convert $250 to euros, multiply $250 X .86 to get 215 euros.

How to Calculate the Euro Into the Dollar

The Basics
Saving
By: Matthew Burch

How to Convert Dollars to Yen

The Basics
Saving
By: Catherine Lovering

How to Calculate The VAT Tax Amount

How to Convert Money Exchange Rates

How to Calculate Dinar Revaluation