Let's Talk Financials: Friends and Sex and the City

Remember Friends, the insanely popular and iconic TV show about a group of New York buddies who love, lose, and laugh in the big city? 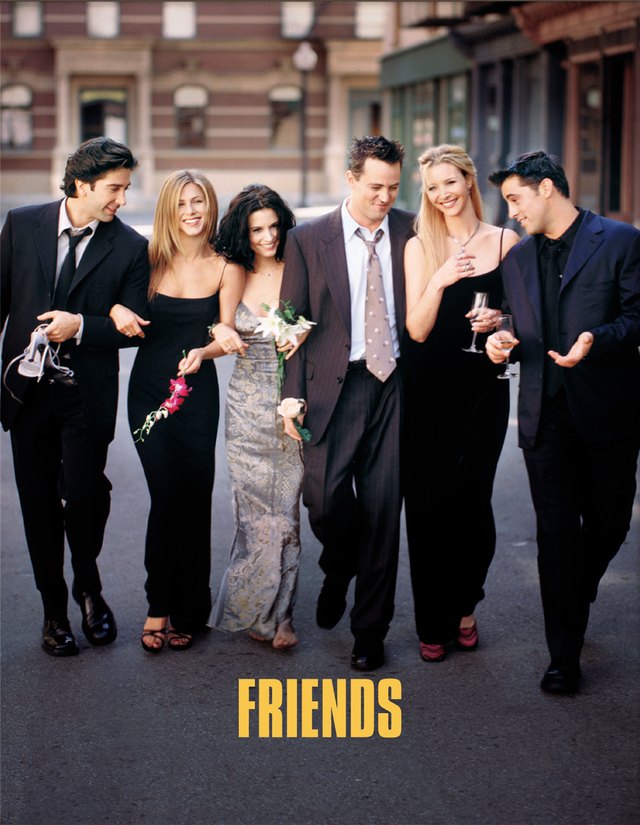 Did you ever notice that Monica and Rachel live in a truly huge apartment? The open plan living room/dining room could fit two typical New York City apartments inside of it. Their colossal pad even boasts a party size balcony, which is just ridiculous. The estimated cost of their giant apartment is $5,000 per month. These gals were certainly living large, but could they realistically have afforded that on their salaries?

Monica works as a chef and Rachel is a waitress, so this humble shack would beout of their reach. The show tries to explain this away by weaving the story that Monica inherited it from her grandmother, but we aren't buying it. Transpondster (I think?) Chandler and out-of-work-actor Joey rent the (albeit smaller) apartment across the hall. It's a stretch to believe any of them could actually afford to live in that building.

Their daily dependence on java from the "Central Perk" coffee shop also costs them a pretty penny with one Reddit user calculating that the gang spent a whopping $110,000 over the decade! 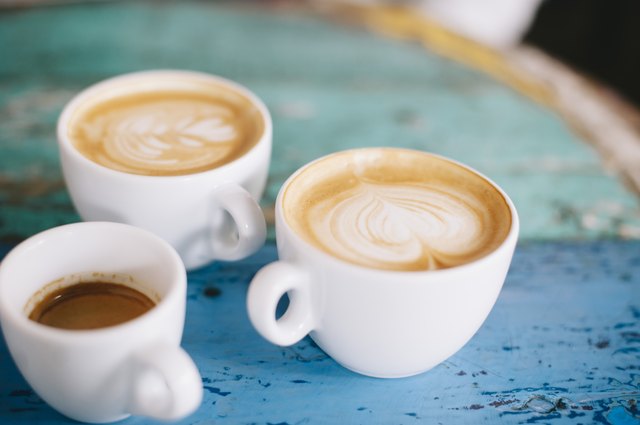 The Friends crew are not the only TV characters living beyond their means, and Sex and the City's Carrie Bradshaw takes overspending to a whole new level.

Carrie Bradshaw only writes one article per week for most of the show. Even if she was paid a generous $300 per article that wouldn't cover one pair of her famous Manolo's. In one episode, she claims to have spent $40,000 on shoes, quite impressive for someone who barely makes $16,000 a year before taxes.

The NY Post estimates Carrie's apartment would cost $2,700 to rent, but it is revealed in one episode that it's rent controlled and costs just $700 per month, however, she can't offset the rest of her crazy expenses, especially as she takes cabs everywhere and never cooks.

A look at her top 7 expenses include: 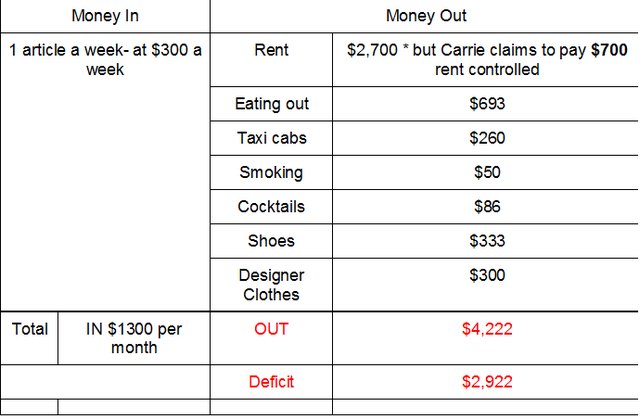 Carrie uses her oven to store sweaters so we know she doesn't cook, many episodes show her eating in fancy NY eateries but she is also tiny. Maybe she eats just once a day? If we just average that out, plus brunch on Sundays, that would equal eight meals per week, even moderately priced at $20 a meal, her weekly food budget would still hit $160.

In one episode Carrie claims she has less than $2,000 in savings yet has that dream wardrobe. At this point in the SATC timeline Carrie has been living in NYC for a decade, so that puts her monthly shoe spending at $333. Her typical designers easily cost several hundred dollars per pair.

Puffing her way through quite a few seasons, we'll guess that Carrie smokes at least 3 packs per week. Considering lower prices in the 1990's, this deadly habit still cost her about $50 per month.

Carrie and her friends made the Cosmo famous and were often shown drinking at parties and nightclubs. Even if some of their drinks were bought by their dates they have to account for at least $20 expenditure per week.

Carrie lives for fashion and is a pack rat, never throwing away an outfit she even states boldly "I like my money right where I can see it…hanging in my closet."

Refinery29 calculated the price of some of Carrie's most iconic outfits and the results were staggering. Fur coats, designer dresses, and vintage Dior don't come cheap. Many of Carrie's favorite looks stretch into thousands of dollars. A very modest guess at her monthly clothing budget would be one new item at a cost of $300. 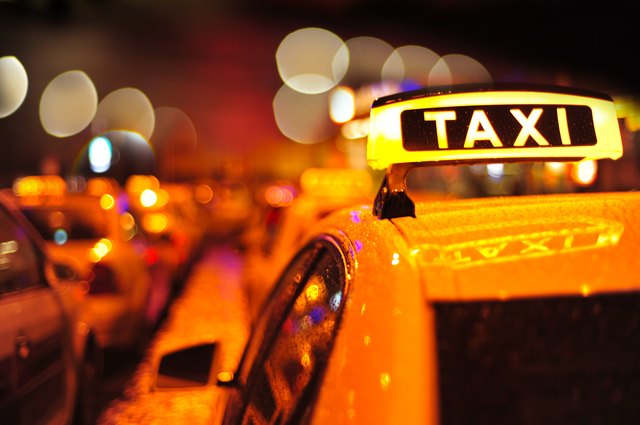 Carrie grabswith Mr. Big's chauffeur drivenevery chance she gets, but still manages to rack up an average of three cab rides a week. With a tip that could easily reach $20 per trip.

A look at the figures reveal Carrie might know "good sex" but she doesn't know squat about basic budgeting. She's going into the red to the tune of almost $3,000 every single month.

Over the course of her decade of living in NYC (before she hits the big time with her Vogue job and book deal) she could easily have racked up debts of $350,000. She would have to sell a lot of books to make that back.

So what can we learn from these crazily inaccurate TV examples?

Well first, the number one most important financial lesson we should all heed is to: live within our means, duh. And second, TV shows are fictional! Just do you. Don't compare yourself to anyone, especially a person who doesn't even really exist.

Here's How Much That Paris Trip in "Home Alone" Actually Cost