What Is an Average Insurance Settlement for an Auto Accident Injury?

Automobile accidents represent not only a significant danger to human safety but a substantial expense each year in the United States. According to a study released by the American Automobile Association (AAA), the annual cost of U.S. auto accidents topped $1.62 billion in 2005, representing a price tag of more than $1,000 per American. This estimate includes medical care, emergency services and loss of productivity. The average insurance settlement for auto accident injuries varies according to a variety of factors, including type of injury and the insurance coverage in question. 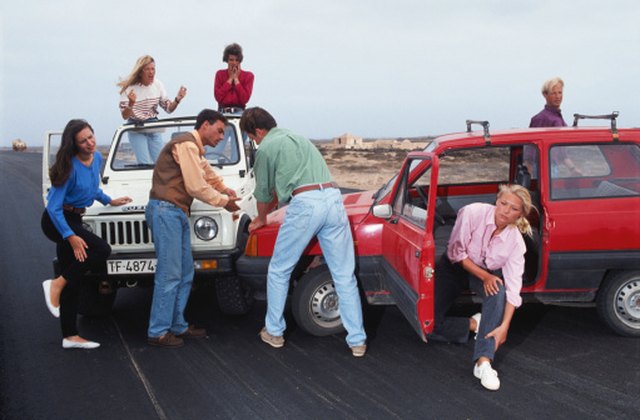 Insurance carriers in states with no-fault auto insurance laws pay for the policy holder's injuries, no matter who swung first.

Insurance carriers in states that have instituted no-fault auto coverage guidelines sell personal injury insurance coverage to motorists. No-fault insurance means that, no matter which individual is at fault for the accident, the policy will pay up to an agreed-upon amount to the insured for injuries sustained in the accident. The settlement limit depends upon the state's guidelines, and in some cases, the severity of the injury. The Insurance Institute for Highway Safety reports that the average settlement cost for personal injury protection claims during the years 2007 to 2009 was $5,190. Injured persons in accidents where the other driver was at fault can sue the other party for personal injury costs above the limit of their insurance coverage.

Insurance providers in states that have traditional tort insurance rules, requiring that the at-fault driver in an auto accident cover medical and other expenses that result from any injuries sustained by those in the other vehicle, sell bodily injury liability coverage. IIHS states that the average settlement for these types of auto injury claims for the years 2007 to 2009 was $9,751. Bystanders injured during the accident can also apply for bodily injury compensation.

The severity of the injury accounts for broad discrepancies in insurance settlements. One critically injured person who survives an accident may incur more than $1 million in medical costs as well as loss of productivity at work and at home. In fact, NHTSA estimates that loss of productivity in the workplace accounts for as much as 26 percent of the total financial fallout of a critical auto injury, and lost home productivity for 9 percent of the overall cost. Private insurance policies covered about one half of auto accident expenses nationwide in 2000, while those individuals involved paid out of pocket for around 26 percent motor vehicle crash expenses. Federal, state and uninvolved drivers inconvenienced by the traffic delays picked up the remainder of the expenses.

In 16 states, at-fault drivers being sued by injury victims for additional damages can invoke the "seat belt defense" in an effort to reduce the damages award. If the defendant can prove that the injured party was not wearing a safety belt at the time the accident occurred, the judge may consider reducing the judgment by a state-sanctioned percentage, provided that wearing a safety belt would have prevented or reduced the severity of the injury.

The Average Insurance Settlement for a Rear-End Collision

The Basics
Cars
By: Jackie Lohrey

How Long Do You Need SR22 Insurance in Ohio?

What Is the Difference Between Comprehensive & Collision Insurance?

The Basics
Cars
By: Michael Evans

How Much Does Liability Car Insurance Cost?

The Basics
Cars
By: Roger Golden