Liquid bank accounts are those you can get your money out of quickly and easily. A variety of bank accounts are liquid assets -- unlike other assets that you can't readily convert to cash, such as real estate. Liquid bank accounts include checking accounts, money market accounts and savings accounts. Although it's also possible to withdraw money from a certificate of deposit, or CD, you typically must pay a penalty unless you wait until the account matures. 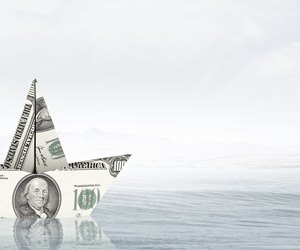 Checking accounts are liquid because their major purpose is to keep money flowing to pay bills and make purchases. You can withdraw funds using your debit card at an automatic teller machine, or you can use checks and online transfers to pay bills. However, you may have to pay charges to get your money. Some banks limit the number of checks you can write each month without paying a fee, and some impose a service charge if your balance falls below a specified amount, such as $1,500, according to Bankrate.

A money market account is also liquid, and it usually pays a higher interest rate than a checking or savings account. The interest rate is variable and changes with market conditions. The minimum opening balance is commonly $1,000, according to Bankrate, and you're typically limited to a certain number of checks each month -- sometimes as few as three or five. You can also make debit cards purchases, although these may also be limited.

The specifics of money market accounts depend largely on the particular financial institution, but banks commonly provide free checks and waive ATM fees.

A traditional savings account is liquid because you can withdraw money whenever you want at the teller window. You can't write checks on a savings account, but banks may allow withdrawals by ATM. Depending on the bank, you may also be able to make online transfers. Savings accounts usually pay a fixed rate of interest, but it's generally modest.

Traditional CDs are less liquid than other bank accounts because you must tie up your money for a set period called the term -- usually between six months and five years. In return, you receive a fixed rate of interest that's typically higher than for a savings account. You can withdraw your money without charge at the maturity date. If you want to take out money before the end of the term, you can expect to be charged an early withdrawal penalty.

Some banks offer liquid CDs that allow penalty-free withdrawals before the maturity date, but their terms vary. Usually these CDs pay lower interest than regular CDs, and they also typically place some restrictions on withdrawals. For example, you may need to keep withdrawals within certain dollar limits to avoid a penalty, or you may be allowed only one penalty-free withdrawal per month. Some liquid CDs require a large opening balance -- as high as $25,000, according to Bankrate.

What Type of Bank Account Can I Open Where I Can't Touch the Money Until I Close It?

The Basics
Saving
By: Pam McCallum

What Are the Functions of ATM Machines?

The Basics
Saving
By: Steven Melendez

The Basics
Saving
By: John B. King

The Basics
Saving
By: Bonnie Conrad