What Happens After Someone Wins a Dream Home?

In 1997, the first Home and Garden Television dream home giveaway in Jackson Hole, Wyoming generated more than 1 million entries. By 2014, that increased to 72 million. Each year the one lucky winner received an ambush-style prize announcement and participated in a televised award ceremony. When the cameras and lights went away, the winner got a big reality-check. The financial realities of winning that home forced most to exchange the dream for something far more practical. 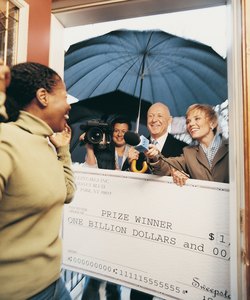 Broadcasters present a check to an ecstatic woman in her home
credit: Digital Vision./Photodisc/Getty Images

If the winner accepts the home, he also assumes its full financial obligations. That includes real estate transfer taxes, deed recording charges and closing costs. The owner is also fully responsible for current and future real estate taxes, title and homeowner insurance, and any other taxes, fees and expenses related to maintaining the home. In addition, the winner is solely responsible for fees and expenses related to the vehicle. That includes taxes, registration, insurance, pickup costs, license fees and any modifications.

All winners are responsible for paying federal, state and local taxes on the home, the cash prize and vehicle. HGTV supplies an Internal Revenue Service 1099 tax form for the approximate retail value of the prize. According to KeyPolicyData.com, the IRS tax bill for the 2014 dream home in Lake Tahoe, California was $764,040. The state tax bill was $229,234, which left the winner with $993,274 in taxes. By taking cash instead of the home, the total federal and state tax bill of $623,538 left the winner with a $753,462 profit.

What Past Winners Have Done

How Much Money Does the Kentucky Derby Winner Get?

How Much Money Does Your Average Pro Surfer Make?

The Highest Paid Reality Stars in the World