When cellphones turned into smartphones, and began to mimic the power found in most computers, banks have been able to provide consumers with powerful mobile banking apps that allow you to complete your banking from wherever you are. This includes making deposits -- depending on the bank and its mobile app -- checking funds, making bill payments, transferring or sending money. Mobile banking differs from the payment features available on many of today's smartphones, as it provides a sign-on link to your individual checking or savings accounts by an app you download from your bank's website. Though some European banks offered mobile banking as early as 1999, it took until 2007 for major banks in the U.S. to develop mobile banking apps that actually worked and customers wanted. 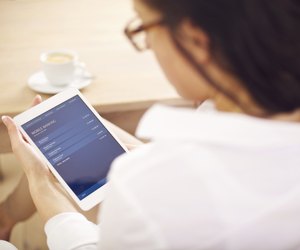 Banks faced mobile banking challenges in the early part of the decade until the first smartphones hit the market in 2007. Consumers found it difficult to view their financial information on the small cellphone screens that were common at the turn of the 21st century. Some banks offered the service, only to discontinue it for lack of interest. In 2002, Wells Fargo developed a mobile banking service and only 2,500 customers enrolled in it. Because of the poor response, they soon withdrew the offering.

By 2008, even smaller banks began to offer mobile banking services and apps. By then, larger banks and their customers were using these services regularly. By 2012, more than 21 percent of all smartphone owners were using mobile banking -- in a report conducted for the Board of Governors for the Federal Reserve -- but 44 percent of that number belongs to the 18-to-29 age group, with the second largest group -- 30 to 44 -- representing 36 percent of those who use mobile banking apps. These numbers are expected to increase as more people rely on smartphones and tablets, and banks continue developing apps for a variety of mobile devices.

When Did Online Banking Begin?

The Basics
Saving
By: Vicki A. Benge

Planned Obsolescence for iPhones Is All in Your Head

The History of the Manufacturing Industry