How is the National Savings Rate Calculated?

Any income that individuals, companies and governmental entities do not immediately spend is savings. Saved money represents postponed consumption and usually earns interest. The U.S. Commerce Department's Bureau of Economic Analysis calculates and publishes the national savings rate. This rate is somewhat confusing, because governments often operate at a deficit -- some might spend more than they earn and thus depress the national savings rate. 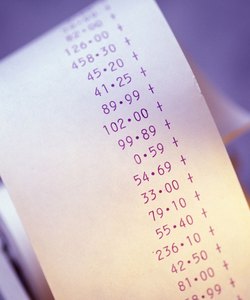 The calculation of the national savings rate begins with the National Income and Product Accounts, published by the Bureau of Economic Analysis (BEA). These accounts classify the private and public sector's money as income, consumption and savings. The national savings rate (S) is the difference between income (I) and consumption (C), divided by income: S = (I - C) / I. The BEA publishes information about personal income and consumption, the retained earnings of businesses, and government revenues and expenditures.

Private savings is the sum of personal savings and business savings. The personal saving rate in April 2014 was 4 percent. To calculate business savings, the BEA measures the amount of earnings retained by businesses after they have paid out dividends and taxes. Companies can use these savings to finance investments. Federal, state and local governments have public savings when current revenue exceeds current expenditures. However, the federal government normally operates at a deficit, creating a source of negative savings. In 2013, Uncle Sam collected $680 billion less in revenue than the federal government spent, representing 4.1 percent of the gross domestic product.

Retirement plans, such as 401(k)s and individual retirement accounts, represent a substantial amount of savings available for investment. For example, Americans held $4.87 trillion of IRA assets in 2011. In that same year, Americans maintained another $3.88 trillion in private plans like 401(k)s. The BEA does not count retirement savings as part of personal outlays, and therefore includes this amount in its calculation of personal savings, which is personal income minus personal outlays.

How to Calculate Annualized Savings

What Are the Causes of Low Savings Rates?

How to Calculate Per Capita Consumption

How to Calculate Debt From GDP Numbers

How to Calculate GDP Per Capita