How to Spot the Pigeon Drop Scam

Like many scams, the con game known as the "pigeon drop" relies on the victim being blinded by greed -- by the idea of getting something for nothing. In the pigeon drop, the victim believes that he will share in some unexpected windfall if he just puts up some of his own money. A look at how this scam works will help you understand how to spot it. 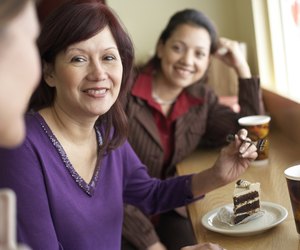 Three women having a conversation in a coffee shop.
credit: Jack Hollingsworth/Photodisc/Getty Images

An Approach by a Stranger

A pigeon drop scam typically begins with you being approached by a stranger who strikes up a conversation, tells a joke or helps you out in some small way. The purpose of this interaction is to get you thinking that the stranger is a good person, a friend -- someone your "gut" tells you is trustworthy. However, the kindness of a stranger isn't evidence of a scam. (He might just be a nice person!) The real clues come later.

At some point, you and your new friend (the former stranger) are approached by another person, who claims to have found a large amount of cash, a piece of valuable jewelry or something else of value. This person may say he just found it in the street, or there may be a more elaborate explanation. Whatever the story, this person starts talking excitedly with you and your new friend, and someone comes up with the idea that the three of you should split the money (or the profits from selling whatever else was "found"). Encouraged by your friend, you agree.

What you don't know at this point is that your new acquaintances are running a scam, and you're the target. The first stranger earned your confidence, so that when the second stranger presented a moneymaking opportunity, you had someone you trusted telling you that it was a good idea. The first tip-off to the pigeon drop, then, is when you find yourself with a new friend, followed soon after by a chance for the two of you to cash in with the help of a third person.

Show Them the Money

There are endless variations on the pigeon drop, but what they all have in common is that in order for you to share in the windfall, you'll have to contribute some money. Maybe it's to prove you're serious about the deal, or to show "good faith" toward your partners. Perhaps one of your partners knows a guy who can sell a valuable item for cash or can launder stolen or found money, but he needs an upfront payment. Maybe the plan is to pool the found money with a deposit from each of you and buy an "untraceable" money order, which you'll cash and split. The requirement that you kick in your own money to participate in this chance opportunity is another sign of the pigeon drop.

The pigeon drop concludes with your partners making off with your money. They might literally run away with your cash. They might hand you a wrapped stack of "cash" that you later discover is really just cut-up paper. They could give you something worthless instead of something of value. It can play out any number of ways. The key is that -- all along -- your "friend" will be encouraging you to take part, getting you excited about your impending good fortune, and making you believe that he has as much at stake -- and as much to lose -- as you do. Right up until the time he and the other guy disappear.

How to Use a Blind Trust for Lottery Winnings

Little Ways We Block Ourselves From Earning More Money

How to Network Without Being a Sleazeball

What Happens to Real Property When Heirs Fight About Selling?

How to Sign Over a Check Made Payable to You

The Basics
Saving
By: Jayne Thompson