The Advantages of Saving Your Money at Home

Although saving money at home in a piggy bank or under the mattress may sound like an old-fashioned idea, the practice is not uncommon. According to the CBS News website, the Federal Reserve indicated that about 8.7 percent of American families did not have a bank account as of 2009. While saving at home eliminates the possibility of earning interest, it can offer certain advantages for some people. 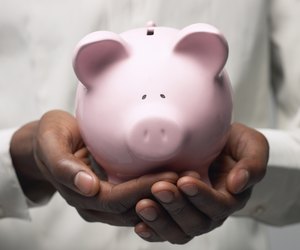 Saving money at home offers certain benefits for some people.

For some people, saving money at home can provide peace of mind. They know where their money is at all times, and they can easily monitor how much money they have at present. Some also do not trust large institutions such as banks or credit unions and believe they may mishandle their funds. People with little financial savvy may not fully understand how financial institutions operate, so they feel more comfortable keeping their money at home.

For some, getting to a bank to make deposits is an inconvenience. According to the CBS News website, federal bank regulators indicated there were about 3,500 rural middle-class neighborhoods that were considered to be underserved by financial institutions as of 2009. For these people, it may be easier to simply save their money at home instead of driving a number of miles to a bank. People who don't own vehicles or have difficulty getting around due to health issues may also find keeping money at home more convenient.

Bank accounts often charge fees, some of which may go unnoticed by consumers who do not monitor their accounts closely. Some banks charge a monthly fee simply for maintaining an account or assess a fee if a balance falls below a specified minimum level. Some consumers may feel that the fees make the minimal amount of interest earned by many savings accounts relatively meaningless, so opening an account is not worthwhile.

Banks are known for safety, as the Federal Deposit Insurance Corporation insures amounts up to $250,000. However, consumers who access their accounts online could be exposed to identity theft by unscrupulous Internet hackers. Saving money at home eliminates this risk, although the risk of theft by burglars or having the money destroyed by fire or natural disaster still exists. These risks can be minimized by keeping the money in a secure location such as a safe.

How to Get a Signature Guarantee Without a Bank Account

The Basics
Saving
By: Joe Andrews

The Basics
Saving
By: Contributing Writer

What Are the Advantages of Having a Bank Account?

The Basics
Saving
By: Michael Wolfe

The Basics
Saving
By: Ronald Kimmons