Cooking for large numbers of people does not have to be expensive if you have a little forethought and plan ahead. Pasta is always a great meal idea for a large number of people, and there are a few different ways that it can be done. A green salad is another cheap idea that goes over well if you are looking to add an appetizer, and roasts are good if you have a particularly carnivorous group. 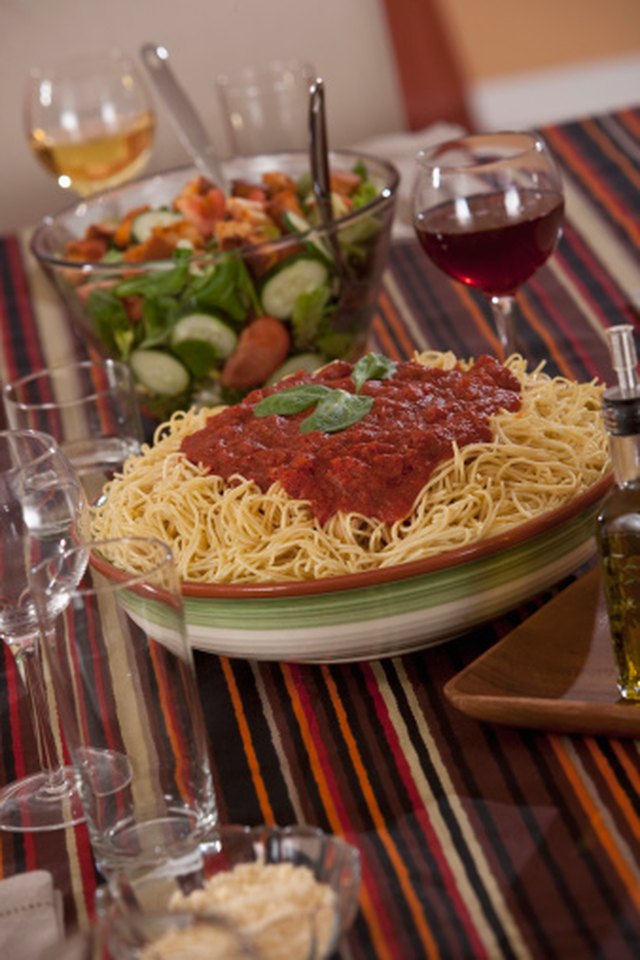 Spaghetti is one popular pasta dish that scales well.

Spaghetti is exactly the kind of meal that can be made for large numbers of people without incurring large costs. The pasta itself is cheap, and the sauce can be bought ready-made or created with canned tomatoes, spices, vegetables and some ground beef if wanted, all of which are inexpensive ingredients. Best of all, it is easy to make in large quantities and most people like it.

If you are making a few dishes for a large number of people and are looking for a meat dish, then roast beef is a cheap and tasty option that most people like. There are a variety of different cuts, and even cheaper cuts, if cooked for longer periods of time, can be tender and juicy. Also consider making several different roasts, each at a different level of doneness, to accommodate people who like their meat well done, medium and rare.

If you are looking to serve an appetizer to a large number of people, one of the best ideas is a simple salad. One option is to make up a large batch of Caesar salad, which has only a few ingredients and is liked by just about everybody. Another idea is to throw a few vegetables in to a green salad and buy a few different dressings for people to choose from, which provides some variety.

Lasagna is another popular pasta dish that is simple enough to make in large quantities. It is easy to make a few different varieties, to account for vegetarian and meat eaters, for example, and the ingredients are inexpensive. The only thing that you may need to take in to account with lasagna is the limited rack space that most ovens have. More than one oven would be ideal, but even extra racks from a few other ovens and careful stacking will solve the problem.

What to Eat When You're Broke AF