Should I Claim Dependents on My Unemployment Benefits?

Although each state's laws governing unemployment eligibility differ slightly, some states provide an additional stipend for claimants' dependents. This stipend is added to the claimant's benefits. Those who fraudulently claim dependent benefits may face felony fraud charges. 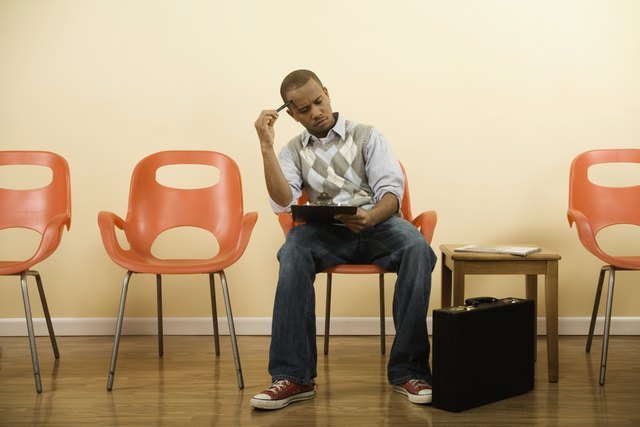 A man is filling out unemployment forms in an office.
credit: Hill Street Studios/Blend Images/Getty Images

If your state provides dependent benefits, it's in your best interest to claim all qualifying benefits when you make your initial claim. While state requirements may sometimes differ, workers may generally use the same guidelines for claiming dependents as when filing their federal income taxes. Unless the dependent is physically unable to work, most states require they be less than 18 years old or a student.

In every state, unemployment insurance agencies base benefits primarily on the applicant's past earnings. States that allow for additional benefits for dependent children usually don't alter their benefit determination calculation, but simply provide an additional lump-sum amount for each qualifying dependent. Most states that supplement unemployment benefits for claimants with dependents typically only provide small weekly stipends in addition to traditional unemployment benefits -- $25 per child in Massachusetts Illinois and $10 per child in Maine, for example -- and limit the number of dependents you may claim.

Claiming dependent benefits to which you are not entitled, you commit unemployment fraud. While penalties for this vary by state and the amount of money defrauded by the claim, every state requires beneficiaries to return unemployment benefits they received to which they weren't entitled. In some cases, future benefits will be reduced accordingly, or the unemployment agency may seek reimbursement directly from the beneficiary. Some states disqualify workers from unemployment insurance eligibility for a period if they're found to make fraudulent claims.

Because dependent stipends are typically small, claiming them is likely to only slightly increase your weekly benefit. Each state sets its own standards for determining your benefit, although all base the amount on your average wages over a period of four calendar quarters known as your base period. Typically, benefits are about 50 percent of your average weekly wage during the base period.

Can I Get a Tax Refund if Claimed as a Dependent?

The Basics
Taxes
By: Meaghan Ringwelski

What Is an Exemption on Taxes?

Can I File Taxes If I Received TANF?

How to Get the Highest Refund From Your Tax Return

The Basics
Taxes
By: Tara Thomas