What Happens If I Don't Report Income on My Taxes?

Every year, nearly everyone of legal age who receives some form of income must file a tax return with the Internal Revenue Service, as well as pay various state and city taxes to local governments. The underpayment of taxes is against the law. However, the consequences of doing so vary. 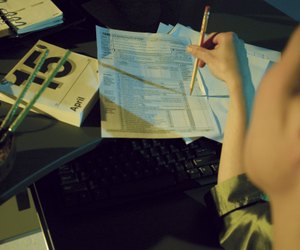 In most cases, the Internal Revenue Service and other government agencies require individuals to self-report the income they make. This can include income earned from a job, as well as from other sources, such as gambling and revenue made through investments. However, if the IRS or another tax-collecting agency is dubious about the validity of a person's tax returns, they may audit her finances.

According to Esquire magazine, the rate at which the IRS audits taxpayers is relatively low. When an audit is conducted, however, the IRS will inspect a large amount of information related to the person's finances, including bank statements, records of investments and receipts for purchases. The IRS will then determine whether additional money is owed or whether the person has paid the correct amount.

If a person has withheld income and is audited, several outcomes may occur. If the IRS does not discover the withheld income and declares that the tax returns have been filed correctly, the person will not be required to pay any additional money. However, if the income is discovered, the person will likely be forced to pay the correct amount of taxes owed, as well as a penalty.

When conducting an audit, the IRS reserves the right to inspect the person's records not just from the previous tax year, but from the previous three years. In addition, if the IRS discovers that the person has underreported his income by more than 25 percent, the IRS is allowed to look back at records from the six previous years. According to MSN, if the IRS believes the taxpayer willfully underreported his income with an attempt to commit fraud, the agency can look at records for the entire time that the person has paid taxes.

People who do not report income on their taxes seldom end up in jail. However, according to Esquire, if the IRS believes that a person has willfully refused to pay taxes, it has the option of pursuing a criminal charge. This option is rarely exercised, but it does exist.

What Is the Purpose of Tax Returns?

The Basics
Taxes
By: Nick Robinson

Tax Tips: How Long Should I Keep My Tax Records?

How to Turn Someone in for Not Filing Taxes

The Basics
Taxes
By: Judson Parker