What Is a Certificate of Debt?

A certificate of debt, also known as a bond, is a written promise issued by a government or company in order to raise money. It states the duration of the loan, the amount of principal and the fixed interest rate. 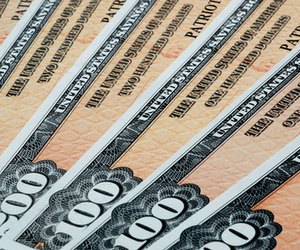 Debt certificates are considered a safer investment than stocks.

Whether they are issued by companies, or by local or national governments, all bonds are classified by the length of time before maturity. Those maturing in less than a year are known as bills, those maturing in one to 10 years are notes and those with longer maturity are bonds.

Companies issue debt when they need to raise money for new products or facilities. It is often cheaper than going to a bank and asking for a loan. For governments in need of funds, the alternatives are to raise taxes or go to international institutions such as the International Monetary Fund. Both are politically riskier options.

Debt is considered a safe investment. Bond buyers, known as creditors, receive fixed income, which is why bonds particularly appeal to people approaching retirement. Unlike stockholders, creditors are not owners of a company and cannot claim a share of the profits. Because they involve less risk than stocks, bonds bring lower returns.

What Is the Difference Between Debt & a Bond?

Can a Bail Bond Garnish Your Wages?

What Is Senior Subordinated Debt?

What Is a Debt Holder?