The Value of the 1935-E One Dollar Silver Certificate

Series 1953-E and other silver certificates are United States paper currency that could be exchanged for the precious metal in the form of silver dollars. The Treasury Department no longer swaps silver certificates for silver or prints them. The 1935-E notes have a face value of $1. They remain legal tender and so are always worth at least a buck even if they are in poor condition and of no interest to collectors. 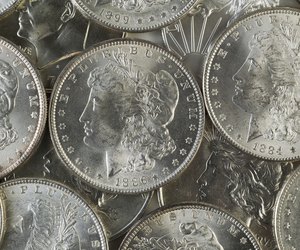 Silver certificates of the 1935 series were printed in large quantities for several years. There are a number of versions including 1935-A through 1935-H as well as experimental series R and S. During World War II, some series 1935-A notes were printed for use in Hawaii and North Africa. Nearly all 1935 silver certificates, including 1935-E bills, are common and thus don't command high prices from collectors. Typically, a 1935-E silver certificate in good condition fetches $1.25 to $1.50. Uncirculated bills are worth $2 to $4. A pack of 100 series 1935-E bills with sequential serial numbers can bring $600. Some 1935-E silver certificates are star notes. This means a star precedes the serial number, rather than a letter. Star notes are worth around $3 in good condition.

How Much Is a 1957 Silver Certificate Worth?

How Much Is a 1928 One Dollar Silver Certificate Worth?

How to Redeem a Silver Certificate

The Basics
Saving
By: Tom Streissguth

How to Find Out How Much a Confederate Bond Is Worth?

How to Redeem Torn Paper Money

The Basics
Saving
By: Carol Adams