What are the Laws Concerning a Safe Deposit Box?

A safe deposit box is a safe and convenient place to store important papers and almost any other small articles that are valuable. In addition to the privacy the box provides, items placed in it are as safe as they can be from loss because of fire, flooding and theft. But state and federal laws may affect what you decide to put in them. 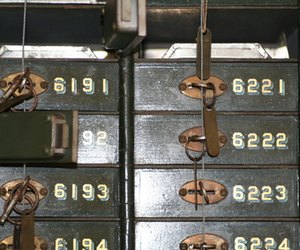 Store your valuables in a safe deposit box.

Federal and state laws don't forbid any specific items from being stored in a safe deposit box, but general laws outline items that are illegal to possess. Illegal drugs, stolen money and goods, and certain types of weapons and explosives are prohibited. Concealment of cash to avoid paying taxes is illegal under federal statutes, so using a safe deposit box to accomplish this goal is also unlawful.

In some states there are limitations on accessing a box that is co-owned by someone who has died. In these states it is a criminal offense to knowingly open the safe deposit box after an owner's death. The law is in place to prevent the heirs from trying to avoid inheritance taxes. In some states the bank may be forced by law to seal the box until its contents can be inventoried by the government.

Usually exceptions are made for the box of a husband and wife who have rented the box together and may not owe inheritance tax on its contents. Another exception is made to allow lawyers and heirs to inspect a box to search for a will, but it must be conducted in the presence of a bank employee and the box must be sealed after the document is removed. (ref 3)

A power of attorney that in other cases is so useful in transferring an individual's rights to other people does not apply to safe deposit boxes. (ref 2)

If there is a reasonable suspicion that illegal items may be in a safe deposit box, law enforcement officials can obtain a court order to freeze the owner's access to it. In criminal cases investigators can force the box open and seize its contents. For noncriminal matters like tax cases, the IRS can have a hold placed on the box until the owner's debt is satisfied. Individuals can also obtain a court order to seal a safe deposit box if there are grounds to do so, such as the settlement of a financial dispute in a civil case.

Is it Legal to Put Cash in a Safety Deposit Box?

How to Open a Safe Deposit Box

How to Keep Cash Safe in a Home

How to Hide Assests in a Safe-Deposit Box

The Basics
Saving
By: Kristin Jennifer

Can You Have an Authorized User on a Bank Account?