Macroeconomics deals with the big picture. Supply and demand are familiar terms to many people, but they are usually used in the context of a particular economy. The study of entire economies, however, must deal with the sum total of supply and demand in an economy – in other words, in aggregate. 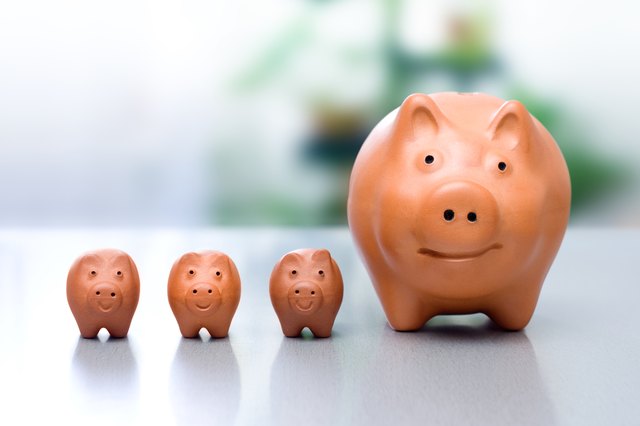 The nominal value of money does not change (a $1 bill is always worth $1), but the purchasing power of a unit of money is subject to change as prices fluctuate. Interest rates are commonly used as a measure of the cost of borrowing money, and changes in this cost have an important effect on aggregate demand in an economy.

Aggregate demand is a macroeconomic term referring to the total goods and services in an economy at a particular price level. Plotting these two on a graph produces what's called an aggregate demand curve, reflecting the fact that prices and demand are subject to change. The AD curve has a downward slope, because as prices rise, demand for goods and services decreases. Interest rates represent the cost of money, and therefore have an effect on prices and aggregate demand.

The standard equation for aggregate demand is: AD = C + I + G + (X-M), where C is consumer expenditures on goods and services, I is capital investment, G is government spending, X is total exports and M is total imports. The quantity (X-M) provides a figure for net exports. Taken together, these factors constitute the total demand for the gross domestic product of an economy.

Changes in the interest rate can also have a profound effect on consumer spending. Most people borrow money to buy things such as houses and cars, and a higher interest rate increases the total cost of the purchase (price), and therefore can reduce the total amount of such borrowing and spending. Consumer spending is the largest component of aggregate demand in the United States, so fluctuations can have a large effect on the overall economy.

The impact of interest rates on aggregate demand is the reason why controlling the interest rate is a powerful tool in monetary policy. The market for U.S. treasuries is one way in which interest rates are determined – not by fiat, but by market forces. Similarly, measures of interbank lending rates, such as LIBOR, represent the actual cost of money.

On the other hand, the fed funds target rate set by the Federal Open Market Committee is a deliberate and sometimes controversial attempt to manipulate economic cycles by influencing interest rates according to their effects on aggregate demand.

The Basics
Saving
By: Austin Berry

What Is the Equilibrium Interest Rate?

What Is the Impact of Credit Cards on Demand for Money?

What Is the Interest Rate Spread?