Election 2016: Where the Candidates Stand on Student Loans

Student loan debt totals more that $1 trillion dollars, with each student owing an average of $30,000. If paid off in full each month, at the timetable suggested by lenders, they will each repay just over $55,000 (assuming no penalties were accrued and that they never missed a payment). That breaks down to about $225 per month for 20 years — at that point some loans are forgiven and then disappear. The federal student loan department has generated a profit of over $1 billion per year every year since 1995. People with student loan debt are waiting longer to get married, to start a business, to start a family — to start their lives. The burden of this enormous debt is often something that students enter into without any real understanding of the process. A recent study showed that most students haven't even the most basic understanding of their loans and don't even know how much they owe.

The student loan crisis has been discussed during several debates this election season.

Here's what we know about each candidate's stance on student loans: 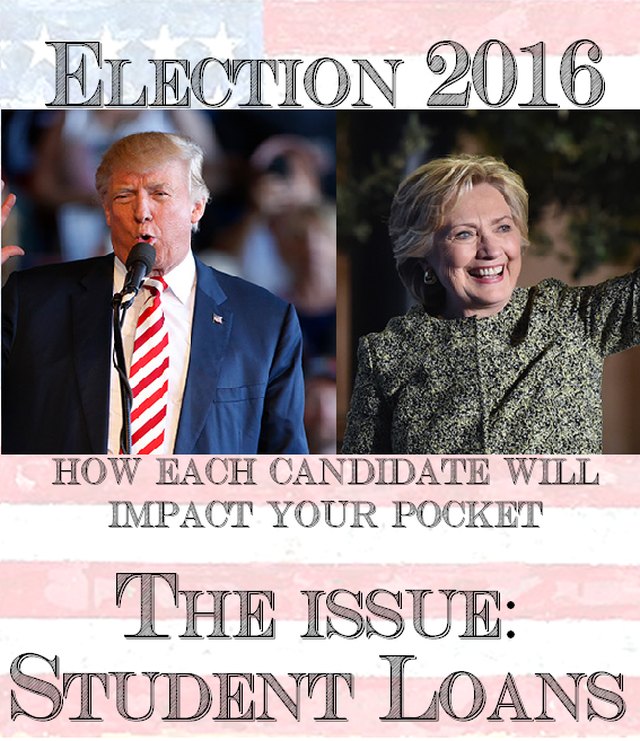 Donald Trump would like to eliminate the Department of Education. However, he has not gone into detail on how he'll replace the functions of that department's duties once it is dismantled. Privatizing loans is another point that Trump is very into, however he has not provided any details moving forward.

He has mentioned plans for lenders to make assumptions on your potential salary based on your declared major and for them to lend an amount that will commensurate with that salary.

He is also in favor of colleges turning away students who are known not to be high performers. Ideally, Trump would like colleges to have some "skin in the game" and also risk losing money when their students do not do well post-graduation.

Hillary Clinton has outlined her full plans for dealing with the student loan crisis. She is in favor of borrowers refinancing their loan rates much the same way as homeowners. In order to stop the swell of new debt, she will implement plans for free state college education for students of families earning less that $125,000 per year.

Moving forward, she would like to see a 10% salary cap on repayment, regardless of balance. She has also made plans to initiate a hold on interest while a borrower sets up their small business.

In order to pay for these programs, she will instate higher taxes for the super-rich.

Student loan debt has become the crushing inevitability of modern life. The costs of higher education have gone up and up for decades despite the stagnant wages of American families. Lenders continue to profit from a system that is set up in order for its participant carry debt to their graves. The key to success in helping student loan borrowers will be in how effective the government is in curbing the rapidly growing cost of education going forward.

The Basics
Insurance
By: Nicole White

How to Get Help Paying Off Payday Loans

The Basics
Debt
By: Pat Kelley

Do You Have to Pay Back Unsubsidized Loans?