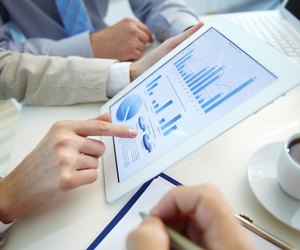 A volatile security or fund will have a high standard deviation compared to that of a stable blue chip stock or a conservative fund investment allocation. A large spread between deviations shows how much the return on the security or fund differs from the expected "normal" returns. However, the steady past performance of a fund does not guarantee a similar future performance. Because unexpected market conditions can increase volatility, a security that at one period had a standard deviation close or equal to zero may perform otherwise during a different period.

How to Calculate the Beta of a Portfolio

The Advantages of Portfolio Investment

How to Calculate Expected Return With Beta & Market Risk Premiums

Expected Return on a Portfolio

Investing
General
By: Nicholas B. Sisson