What Is the Tax on Restaurant Food in Illinois? 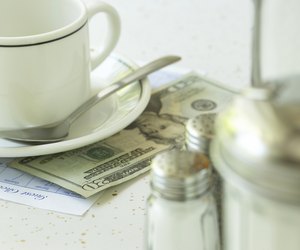 What Is the Tax on Restaurant Food in Illinois?
credit: Jupiterimages/PHOTOS.com>>/GettyImages

The state of Illinois imposes a sales and use tax of 6.25 percent on food, soft drinks and alcoholic beverages purchased at a restaurant for consumption on the restaurant premises.

Cities and other jurisdictions within the state of Illinois may impose taxes in addition to the state's 6.25 percent sales and use tax. For example, Jersey County imposes a 1 percent food tax, bringing the total tax on restaurant food in that county to 7.25 percent. Other jurisdictions in Illinois that impose additional taxes on restaurant foods include Bond, Madison, Monroe and St. Clair counties.

The Chicago area imposes the highest taxes on restaurant food items of any area in Illinois. In addition to the Illinois state tax of 6.25 percent, restaurant food purchases in Chicago are subject to Cook County tax of 1.25 percent and a Chicago city tax of 1.25 percent. Cook County and its surrounding counties also impose a Regional Transportation Authority tax on food -- in Cook County, this tax is 1 percent; in surrounding counties, it is 0.75 percent. Downtown Chicago restaurants are also subject to a 1 percent Metropolitan Pier and Exposition Authority tax, bringing the total sales tax on restaurants in this area of Chicago to 10.75 percent.

The state of Illinois does not impose the regular sales and usage tax rate on food sold for consumption in a place other than the restaurant where it was purchased. Instead, it imposes a lower tax of 1 percent on "to go" food. However, carryout beverages are taxed at the standard rate.

The Basics
Taxes
By: Peter Lancett

Is Soda Pop Taxable in Ohio?

The Basics
Taxes
By: Ashley Adams-Mott

The Basics
Taxes
By: Melissa Heath

How to Calculate Sales Tax in Virginia

The Basics
Taxes
By: Carl Mullan

What Items Are Sales Tax-Free in Florida?