Promissory Notes & the Death of a Payee

When a person cannot borrow money from a bank or lender, he may decide to seek money from an individual. Like a loan agreement, a promissory note is a contract between two parties in which one agrees to repay the other according to the stipulations of the agreement. If the holder of the promissory note dies, the obligation of the borrower may become unclear. 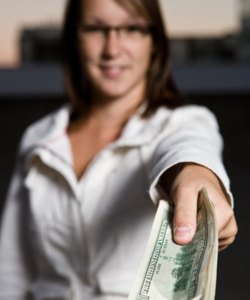 A promissory note is less detailed than a loan agreement.

A promissory note is a written promise to repay a debt according to terms agreed on by the payer and the payee. The payer is the person who promises to repay the loan, while the payee is the person who is entitled to receive the loan payment. The note may consist of a specific date or schedule for repayment, or it can be "on demand" with the understanding that the debt is to be repaid at some date in the future, or when the lender requests it.

Promissory notes are "unsecured obligations," which means if the payer files for bankruptcy, any remaining financial claim on the loan only goes to the payee after all other secured creditors have been paid. To ensure that the lender receives his money regardless of the borrower's financial circumstances, a condition can be added to the promissory note which backs or secures the loan with property or other assets of the borrower.

If the promissory note holder, or payee, dies while there is still an outstanding balance on the loan, the obligation of the payer may depend on the payee's actions prior to death. If payee gave his estate executor or administrator permission to have the debt obligation transferred upon his death, the payer can be held financially responsible for the remaining balance on the loan. Likewise, if the loan borrower dies, the estate of the note holder may be able to sue the estate of the borrower for the remainder of the debt.

Unlike standard loan agreements, promissory notes do not necessarily account for the possibility of one party dying before the agreement is fulfilled. To avoid the legal and financial problems that can arise when one party of a promissory agreement dies, many individuals add a "self-cancelling" or "death terminating" clause to their agreement. This clause cancels the financial obligation of the payer in the event of the loan payee's death.

When Someone Dies What Happens to Their Car Loan?

The Basics
Cars
By: Beverly Bird

What Happens to Student Loans If I Die?

What Happens With a Judgment if the Debtor Dies?

Does a Death Void All Contracts?

Can I Get a Payday Loan and Put It in Someone Else's Checking Account?