Does Maryland Have Sales Tax on Car Sales?

Strictly speaking, Maryland does not impose sales tax on the sale of cars and light trucks. However, the state has a separate excise tax on vehicles that effectively serve a sales tax on car purchases. This tax has the same rate as the state's general sales tax. 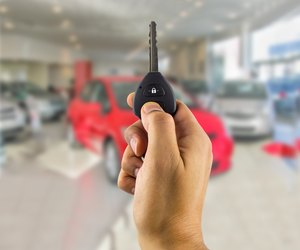 Maryland charges a "titling" tax on vehicle sales, rather than sales tax. In practice, there's little difference. A sales tax is a tax on the actual transaction -- the buyer giving the seller money for ownership of the vehicle. The titling tax is a tax on a service provided by the state -- issuing a new title in the buyer's name.

As of 2011, the Maryland titling tax rate was 6 percent. That's the same rate as the state's general sales tax. The actual amount subject to the titling tax differs depending on whether a buyer has purchased a car from a dealer or from a private seller.

When a dealer sells a car, the state bases the tax on the purchase price of the vehicle, minus the value of any trade in. Dealer processing charges are included in the taxable amount. So if you bought a new car from a dealer for $30,000, including processing charges, and you traded in your old car for $5,000, you'd be taxed on $25,000. At 6 percent, your titling tax would be $1,500. Rebates from the vehicle manufacturer are not subtracted from the purchase price, but any rebates or other discounts offered by the dealership itself are subtracted from the price. When buying from a dealer, you'll usually pay the titling tax on the spot as the dealer prepares the paperwork for requesting a title. In that way, the titling tax is all but indistinguishable from a sales tax.

In a private vehicle sale, the state generally assesses the titling tax based on the "book value" of the vehicle -- that is, the value established by national services that estimate used-car market values. However, if the car is less than seven years old and sold for at least $500 less than book value, the state may base the tax on the lower purchase price, rather than the book value. To get the lower tax, the buyer must submit a Maryland bill-of-sale form, Form VR-181, that states the purchase price, has been signed by both buyer and seller, and has been notarized. For cars seven years old or older, the tax is assessed on the purchase price, as stated in the sales agreement between buyer and seller, or the state-defined minimum value of $640, whichever is higher. In the case of used cars, buyers pay the tax when they go to the state motor vehicles department to obtain a new title.

How to Calculate My Car's Basis for Taxes

The Basics
Taxes
By: Shanan Miller

How to Figure Sales Tax for a Car in Massachusetts

The Basics
Taxes
By: Samantha Kemp

Tax on Purchasing a Vehicle in Wisconsin

The Basics
Taxes
By: Andrew Latham

How to Determine the Vehicle Tax in Spartanburg, S.C.

The Basics
Taxes
By: Mike Vitanza

How to Sell a Car by Signing the Title Over