How Does Having Two Dental Insurances Work?

When you have two dental insurance plans, both insurers work together to determine your coverage and who pays for what. The formal process of sorting out your double coverage is called coordination of benefits. Both dental plans will determine who the primary carrier is and who the secondary carrier is. Coordination of benefits impacts how your claims are paid but not necessarily the actual benefits available to you. Occasionally having two dental plans makes no impact on your coverage at all. 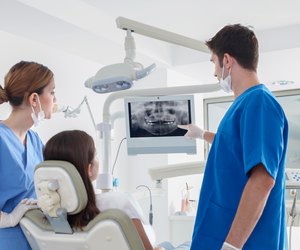 How Does Having Two Dental Insurances Work?
credit: stockvisual/iStock/GettyImages

Per industry standards, the dental insurance you receive through your employer is considered your primary insurance plan. Insurance obtained elsewhere, such as through a retiree plan or your spouse's plan, is considered your secondary insurance. If you have dental coverage through two jobs, the insurer you have been with the longest is your primary carrier. Children with dual coverage fall under the birthday rule. This means that the parent with the earliest birth month and day (excluding year) provides the primary coverage. Other factors such as court orders may preclude the birthday rule.

Depending on the employer, the insurance carrier may include a non-duplication of benefits clause in its dental benefits plan. The secondary insurer only pays when the primary carrier does not pay up to the full allowed percentage. Often the primary will pay the full percentage allowed, which means the secondary carrier does not pay anything, and you pay the difference for services covered at less than 100 percent. For example, if the primary plan pays 80 percent, and 80 percent is the amount covered by the plan, you pay the other 20 percent. If the plan percentage is 80 percent but the primary plan only paid 70 percent, the secondary carrier would pay 10 percent and you would pay the other 20 percent.

The Basics
Insurance
By: Francine Richards

The Average Cost of Dental Insurance

The Basics
Insurance
By: Grace Keh

The Basics
Insurance
By: Tim Grant

How to Remove Dependents From Blue Cross Blue Shield

The Basics
Insurance
By: Miriam C

What Does Coinsurance Mean?