The Identity Theft Assumption and Deterrence Act of 1998 identifies the crime of identity theft as the transfer and use of any name, number or identifying characteristic that can be used to commit a crime. Identity thieves can obtain this information through telemarketing scams, mail fraud or email messages seeking sensitive data. These thieves also have a wide range of motivations for stealing personal information, ranging from financial to criminal to personal. 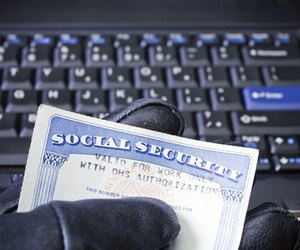 A study conducted at the University of Alabama at Birmingham, or UAB, found that the major motivating factor for identity theft is the lure of quick and easy money. Some identity thieves have switched from dealing drugs or burglary to identity theft when they found they could make more money faster by stealing identity information. Some thieves used their ill-gotten gains to finance lavish purchases, such as TVs or cars. Others relied on their proceeds for everyday survival, while some of those interviewed used their stolen money to throw outrageous parties.

In some cases, the motivation for identity theft is more personal than financial. Jilted lovers, former friends, bickering business partners and even family members can use identity theft to shatter the lives of those they feel have wronged them. The parties seeking revenge can clean out bank accounts, run up credit cards and post sensitive personal information about their targets. In one instance reported in California, a jilted man posted photos of his ex-girlfriend and her adult daughter -- along with contact information -- on a Craigslist ad promoting prostitution.

A subset of people who often seek easy access to cash are addicts. Alcoholics, drug addicts and problem gamblers frequently need quick cash to feed their addictions. The UAB study found that 22 of the 59 thieves interviewed mentioned that they engaged in identity theft to get money for their habits. One of the thieves interviewed in the study spoke about using the proceeds from identity theft to buy crystal methamphetamine after she and her husband lost their jobs.

Concealment of Other Crimes

Some identity thieves use their stolen information as a tool to commit even bigger crimes. They may cover their tracks by implicating the true owner of the stolen identity in their crimes. In one case, the president of a major technology firm had his identity stolen by a notorious drug dealer. The victim has had to show a letter from a federal law enforcement explaining that he is not the drug dealer when returning from his overseas business trips. The same victim was also the target of a raid on his home due to mistaken identity.

One More Reason to Be Angry About Data Breaches

What Is a Credit Card Dump?

Does Being Well-Traveled Make You More Employable?