How to Figure Pennyweight of Gold

If you're buying or selling gold or other precious metals, you may come across a unit of weight measurement known as the pennyweight. It's from an old system of measurement known as the Troy system, and it is said to be based on the weight of a one-time English penny. You can use a table to convert pennyweight into more familiar systems like ounces or grams, or you can use a pennyweight calculator to do the math for you. 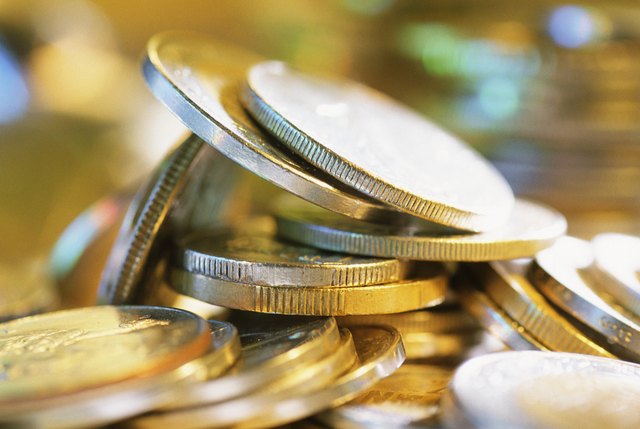 A common exception to the rule is precious metals such as gold and silver, which are often weighed using a system known as the Troy system of weights. This was historically used in the United Kingdom and elsewhere in Europe and is said to be named after the city of Troyes in France, not the Troy found in ancient Greek legend. The Troy weight system has a unit called a grain, a pennyweight that is equal to 24 grains, a Troy ounce that weighs 20 pennyweight and a Troy pound that weighs 12, rather than 16, Troy ounces. The Troy ounce weighs more than an avoirdupois ounce, and a Troy pound weighs less than an avoirdupois pound.

It's important to know whether measurements are given in Troy, avoirdupois or some other system when you are talking about prices or other features of some kinds of goods. A good deal for buying a Troy ounce of gold may not be a good deal for buying an avoirdupois use of the system. Most price quotes referring to ounces of gold or silver are likely using Troy, but it's always worth checking to make sure.

Converting Troy to Other Systems

Troy weight may be commonly used for precious metals, but it's not a familiar system for most people. If you find a weight given in terms of Troy ounces, pennyweight and other Troy units, you can convert it to a system you're familiar with. On the other hand, if you have weights in kilograms, avoirdupois pounds or another familiar unit and you wish to convert to Troy, you can also use a simple formula for that purpose.

You can also find online calculators to convert between the various measurement systems so that you can enter a weight in one system and convert it to another. This is useful if you have a price quote for gold or another precious metal in one unit and need to convert it to one of the other systems of measurement to see how much your holdings are worth.

You can readily find prevailing prices per weight for gold at various purity levels, usually given in karats and Troy ounces, online at various financial news and information sites. Recall that higher karat levels of gold are more pure, with 24-karat gold referring to pure gold.

How to Choose a Jewelry Scale

How to Identify Real Gold Coins

How to calculate the odds of winning the PowerBall lottery

How to Measure 925 Silver Value