If My Spouse Has a Judgment Against Him, How Does This Affect Me?

If your spouse owes money, there are times you might have legal responsibility for the debt. This depends on several factors, including your state's laws, whether you have jointly owned assets and whether you made any commitments to the creditor. 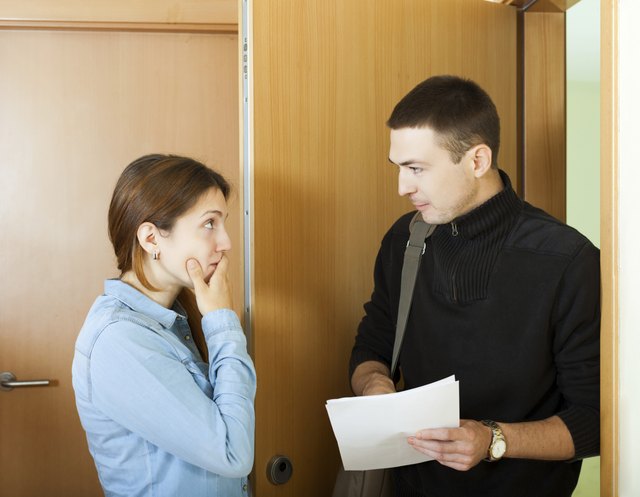 A creditor may be able to demand you pay your spouse's debts.
credit: JackF/iStock/Getty Images

First some good news: You can't be billed for your spouse's debts incurred before you married. Your spouse's older debts are his own. It can still affect your life together if a creditor garnishes his salary or places a lien on his assets, but that creditor can't garnish your pay or take your house.

However, if you and your spouse co-own a major asset, like a house, it's possible your spouse's creditor can still put a lien on it for a premarital debt. This depends on state law, which varies wildly across the country.

If you live in one of the nine community property states, the law says everything either spouse earns during marriage belongs to both of you equally. The same applies to debts: if your spouse runs up a $5,000 debt, you're on the hook as much as she is. If you have a steady income and your spouse doesn't, creditors can use a judgment to garnish your paycheck.

The other states apply a common-law standard to marital finances. If your spouse runs up a debt -- except debts for family necessities, such as food -- creditors can pursue him, but not you. The critical exception is any debt both of your names are on. For example, if you take out a joint auto loan to help a spouse who couldn't qualify based on his own credit score, your creditor has the right to squeeze you for the money if he doesn't pay the bill each month.

If you own assets jointly with your spouse -- such a bank account or a home -- his creditors may be able to seize half or all the assets, even in common-law states. Typically, creditors can't get more than half the money in a joint account if only one of you is responsible for the debt. Other types of joint property may be completely protected, depending on state law. For example, a house that's jointly owned as "tenancy by the entireties" -- a kind of joint ownership used in some states -- can't be seized for a debt owed by one spouse alone.

Can My Wages Be Garnished for My Husband's Debt?

Does My Husband Have to Know I'm Getting a Loan?

What Happens to Debt When a Person Dies?

What Are Non-Exempt Assets in a Judgment in Texas?

The Basics
Debt
By: John Csiszar

If Your Spouse Cleans Out Your Joint Account, Can You Legally Get That Money Back?

The Basics
Saving
By: Beverly Bird