What Is the Average Cost of House Foundations?

Builders typically determine the cost of a house foundation by calculating the cost of excavation, supplies and labor for the project in accordance with the foundation's square footage and depth. However, many factors can affect these calculations, such as the type of foundation chosen and the location of the home; and even then, builders can only provide an estimate of costs rather than a final price. 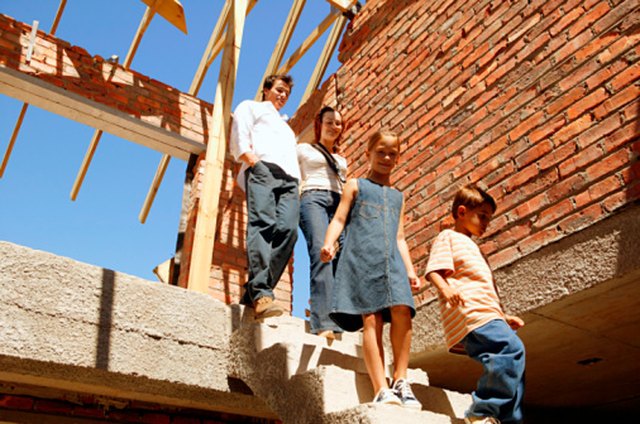 Foundation costs vary by home according to size and type.

In addition to the price of supplies and labor, several other factors determine how much h your home's foundation will cost to install. For example, the type of foundation you install will affect the cost. A slab-on-grade foundation is the simplest foundation to install and costs significantly less than a full foundation — known to many as a basement. Furthermore, the actual square footage of your foundation is another significant cost. Some homeowners may save money on their foundation by building their homes upwards into a second or third story, rather than expanding the home into one large single level.

Many people prefer full foundations because they protect pipes and plumbing from outside weather conditions, whereas pipes are typically buried underneath slab-on-grade foundations. Unfortunately, while full foundations are prevalent in many parts of the U.S., the soil conditions in some areas may not be favorable for them. For example, the North Texas area near and around Dallas is filled with clay soil that expands and contracts during wet and dry weather. Though it isn't impossible for builders to install full foundations in these areas, it may cost significantly more to construct than in other areas of the U.S., and you may face costly repairs in the future if soil movement causes cracks or leaks in the foundation.

It is important to consider that foundation costs vary by home. Builders and contractors will provide you with cost estimates for installing a foundation, but are unlikely to do so without first seeing the finished home plans for your house. They may also wish to examine the property you plan to build on to give a more accurate estimate. Additionally, as with all home construction projects, things may not go as planned once excavation begins on the foundation. Contractors may find a water table or solid rock, which could inflate price estimates or derail your home-building plans altogether.

Home foundations often require future repairs, which can add significantly to the overall cost of the foundation. When foundation failure occurs due to cracks, faulty construction, flooding, unstable soil or other problems, you may pay thousands of dollars to restore it. According to Cost Helper, foundation cracks may cost as little as $400 to fill, while moderate to severe foundation damage may cost as much as $30,000.

How Much Does It Cost to Stucco a House Vs. Vinyl Siding?

What Is the Average Cost to Insulate an Attic?

How To Calculate the Cost To Build a House

How Much Does It Cost to Put in a Basement?

How to Grade Your Yard Away From Your Home's Foundation