Salary of a Ph.D. Professor

Salaries of PhD professors can range from $50,000 to around $150,000, according to PayScale. That $100,000 difference will depend on the size of the college where you choose to teach, how many years you have experience with teaching, if research and publishing are part of your requirements, and the field in which you teach. The location and size of the school will factor into how high compensation will be for a professor with a PhD. Schools in Urban areas such as New York City or Boston will usually offer higher salaries than schools in suburbs or rural areas. Ten New York University professors said they earned over $200,000 annually on GlassDoor, whereas professors at Drew University earned around $96,000. The size and the name behind the school is will also be a factor. Schools like Harvard pay an average salary of $194,000 to professors, according to research conducted by The University of North Carolina at Chapel Hill. Meanwhile, Montana State University pays professors an average of $83,000 annually. Experience in teaching plays a role, as it does on any career track.
credit: Jupiterimages/Photos.com/Getty Images

Salaries for PhD professors can also depend on what subjects they teach.
credit: Hemera Technologies/AbleStock.com/Getty Images 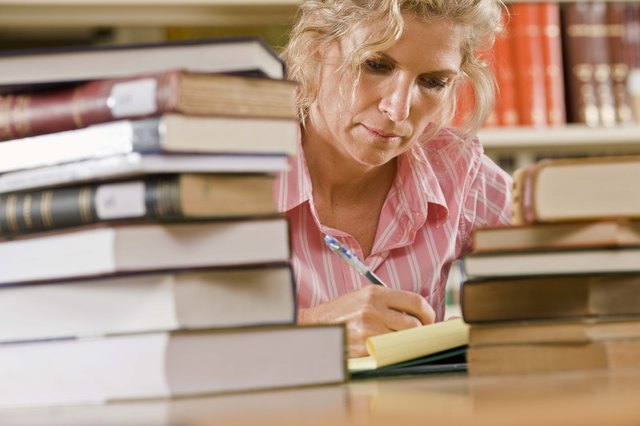 Professors with PhDs may also be required to conduct and publish their research.
credit: Jupiterimages/BananaStock/Getty Images

Professors with PhDs may also be required to conduct and publish their research, which makes professors more valuable to the university and increases chances for tenure, according to the Berkley's website. Tenure review usually happens after seven years. Publications and evidence of research should be brought to the tenure review to prove how valuable you are to the university; this demonstrates a professor's ability to balance the work load of teaching with academic analysis.

How Much Do Illustrators Make a Year?

The Salary of a Medical Microbiologist