The Salary of a Mascot

If you've ever sat in the stands, wondering what a mascot makes for wearing costumes and dancing around, you aren't alone. But the salary of a mascot can vary widely, depending on whether you're an NFL or NBA mascot, or whether you're providing costumed entertainment at minor league games. Although the national average for mascots is just over $29,000 a year, a small percentage of mascots earn six-figure salaries for their work. 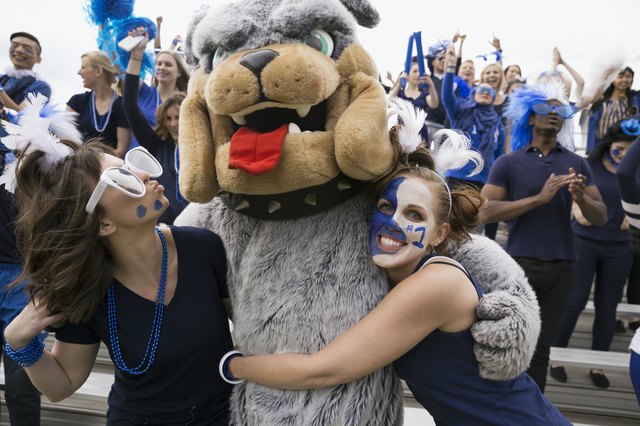 Unlike players, mascot salaries aren't always known publicly. There's a good reason for that. The OKC Thunder mascot's salary, for instance, is secret because the team prefers to keep the identity of the person in the costume a mystery.

That mascot perfectly illustrates the many duties of someone in that position: entertaining crowds, handing out memorabilia, posing for photos with fans and even showing athletic prowess. Although being able to make a touchdown or slam-dunk a basketball might not be part of the job requirements, those skills don't hurt.

Typically, mascots work each game, whether home or away. A good mascot can lighten the mood in an otherwise tense game by dancing and entertaining the crowd. All of this can be challenging since the costumes mascots typically wear are restrictive by design.

Mascots are entertainers, so while no formal training is required, it can't hurt. Primarily, you'll need to be good with people. Training is available through Raymond Entertainment Group's Mascot Boot Camp, as well as other programs. Since many of these training programs also offer placement services, the right one could also connect you with a team in need of your services.

Most major league teams have mascots, as well as many minor league teams. However, not all teams have full-time mascots, so you may be looking at doing your mascot work as a side job. You'll probably be expected to be available for both home and away games. The Vikings mascot, for example, works eight regular-season and two pre-season games each year.

Years of Experience and Salary

In 2015, mascot salaries were spotlighted when the requested salary of Vikings mascot Joe Juranitch would have made him the highest-paid mascot in the NFL. The typical NFL and NBA mascot salary is in the $60,000 range, but Juranitch reportedly wanted $20,000 per game, for a yearly total of $200,000 per year.

After 10 years or so, mascots can earn six-figure incomes, but only about 10 percent of full-time mascots fit that criteria. Currently, an NBA mascot salary is the top in the industry, going to a Denver Nuggets mascot who makes $625,000 a year. Typical salaries range from $25,000 in the minor leagues to $60,000 in the NFL, NBA, MLB and NHL.

However, when you're looking at salaries, it's important to look at overall averages, rather than focusing in on an OKC Thunder mascot salary or Vikings mascot salary. The national average for mascots, at all levels, is $29,140 per year. At the college level, mascots may be paid in scholarships, as well as perks that come with traveling with sports teams, like free hotel stays and meals.

Although mascots aren't generally tracked when it comes to industry career trends, it's hard to deny the role social media is playing in sports. An OKC Thunder mascot salary or Los Angeles Lakers mascot salary may only rise as teams realize the important role they play. Having someone available to snap sharable photos with fans at each game can be a valuable marketing expense for a team hoping to continue to draw audiences to their games.

Many teams have taken mascots beyond game entertainment. The Detroit Pistons used its mascot, Hooper, as the star of 29 comedy videos posted on social media platforms. The move paid off, as the videos received 4.7 million impressions as of September 2018. This type of marketability gives mascots negotiating power during the casting process.

The Average Salary of an NFL Athletic Trainer

Salary of a Professional Cheerleading Coach