Church jobs are good choices for individuals who want to combine their careers and faith. They employ ministers, choir directors, bookkeepers and other workers such as administrators. Pay typically is not stellar for the majority of church staff jobs, but the positions provide plenty of opportunities for offering spiritual and economic relief to individuals and communities. 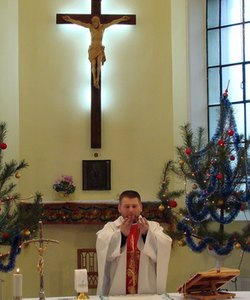 Salaries in churches depend on your experience, the church size and other factors such as location.

Clergy are the religious leaders within the church such as ministers, pastors and priests. The Bureau of Labor Statistics provides salary information for these workers but does not break down earnings according to denomination or leader title. They show that, based on 2009 data, the average annual wage for a member of the clergy was $46,960, or roughly $22.58 per hour. The range of wages, however, is $22,940 to $75,320, or $11.03 to $36.21 per hour.

Musicians provide songs that accompany church services and other events like weddings. They have highly variable salaries. Payscale shows that, as of 2011, directors of music ministry make a typical wage of $34,304. However, as noted by C. Martin Steinmetz of the American Guild of Organists (AGO), salaries for church musicians depend largely on the training level of the musician. Those who have only a service playing certificate may earn as little as $12,100 or as much as $56,700, depending on the number of hours worked, based on 2007 data. Musicians who have a doctorate, by contrast, may earn between $69,100 and $99,800. The responsibilities of the musician also impact wages.

Administrative positions in churches include teachers, secretaries and office managers. Payscale does not provide annual wages for these positions, but does give salaries in terms of hourly rates. Secretaries make the least at $11.15, as of 2011. Teachers earn the next highest salaries at $11.31. Administrative office assistants earn $11.96. Office managers get an average of $13.38, while office administrators have salaries of $13.72 an hour. Executive secretaries earn $12.32. The highest wages go to bookkeepers. They earn $15.30.

The size of a church greatly impacts the salary available for staff members. The larger the church, in general, the more responsibilities staff members have. For example, a senior pastor at a church with a congregation of 1,000 may preside over just one or two services, while a senior pastor in a mega church may be giving services every day. Similarly, a choir director in a small church may have only one choir to oversee, while one in a large church may have as many as five or six. This translates to more hours worked, which increases salaries. Location also can be a factor, as with other jobs.

The Average Salary of an Assistant Pastor in the PCA

Pastor Pay Scale Based on Area and Church Size

The Average Salary of a Church Music Director

How Much Do MLS Referees Make?