How to Calculate Laptop Depreciation

Depreciation is the gradual loss of an asset's value for tax purposes. The IRS allows a business to claim depreciation as a deduction from income, thus lowering the annual tax bill. If you're using a laptop to generate income for your business, you can generally deduct it, although if it's also being used for personal use, its value may not be fully deductible. 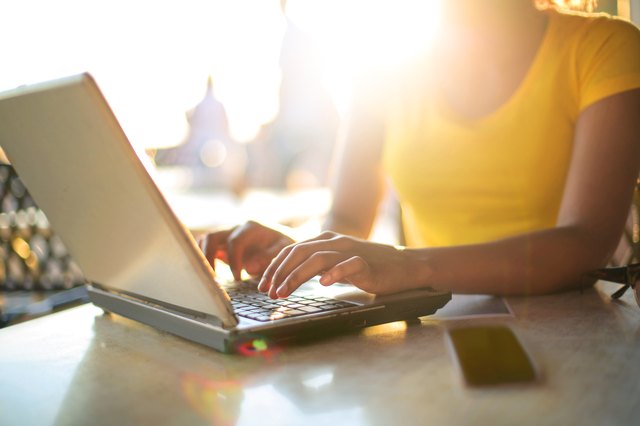 As the assets that you purchase and place in service for a business gradually age, your business racks up a deductible loss. This is not the same as deductions you claim for insurance, advertising, salaries, transportation and other intangible expenses, and only major assets such as vehicles, computers and factory equipment with a useful life longer than a year are eligible for depreciation. You can't depreciate inventory or goods purchased for resale or goods bought just for personal use. To claim a depreciation expense, you'll have to complete

The IRS assigns depreciation periods for each type of depreciable assets. It allows five years for "information systems," a category that includes laptop computers. A business that intends to depreciate any property must figure the basis, which is the purchase price including taxes and any other costs such as delivery charges or maintenance contracts. If you borrow to pay for the laptop, you can also include interest charges as part of the basis.

How to Calculate Depreciation

The IRS provides handy percentage tables in its Publication 946 that allow a business a relatively easy way to calculate the depreciation amount in each year. The alternative depreciation system applies if the laptop was used less than 50 percent for the business, was used in a tax-exempt business, or was used outside of the country. If you're using the laptop for a mix of personal and business purposes, you may have to scale the value you depreciate based on how much of its use was for your business.

As long as at least half of their use is dedicated to the business, laptop computers also qualify for Section 179, which allows you to write off the expense in a single year. In 2018, the tax rules limit the total Section 179 amount to $1,000,000 for all depreciated property in a single tax year. In addition, the rules only allow you to depreciate the amount you paid over and above any trade-ins made for the equipment. For example, if you traded two printers and $500 for a new laptop, only the cash amount of $500 would be depreciable under the Section 179 rules. This type of deduction is also claimed on Form 4562.

How to Calculate Depreciation on Furniture

Can I Write My Laptop Off on My Taxes?

How to Calculate Depreciation With a Half Year Convention

The Basics
Taxes
By: Alia Nikolakopulos

A Depreciation Guide for Tools

The Basics
Taxes
By: Sarah Shelton

How to Calculate Depreciation on Schedule C