Banks charge their customers for a variety of services, including overdraft and non-sufficient funds fees. Overdraft fees can be deducted when the bank honors any payment that results in a negative account balance, even if the overdraft is less than $1. Returned checks typically generate the same fees. Many banks charge $35 or more per infraction, so being dinged for a few overdrafts or NSFs can add up quickly. There are, however, steps you can take to get these fees reversed and have the bank credit the money back to your account. 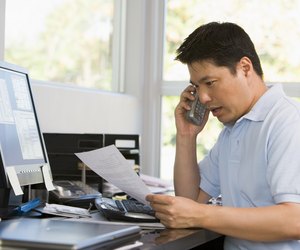 Acting quickly once you've found out about the bank charge usually will lead to the best result. Cover the overdraft as soon as possible, which will communicate to the bank that you are diligent about correcting the shortfall and that you stay on top of your financial affairs. Once the shortage in the account has been rectified, call the bank and ask for the overdraft fee to be waived.

Start your phone or in-person conversation with a calm and polite tone. This will develop a better rapport with the bank representative than if the call starts off as a confrontation. Keep in mind that if the bank was correct in charging the overdraft fee, you're asking the representative to do you a favor, which is more likely to be granted with a positive approach.

Banks do make errors that cause overdrafts, however. For example, Bank of America's smartphone app suffered a glitch at one point when it confirmed check deposits but didn't put money in customers' accounts. If the bank is at fault for the overdraft, take the same calm approach, provide documentation of the error, and request the reversal of all the fees resulting from the bank's mistake.

If this is the first time you've been charged with an overdraft fee, explain how it happened and why it should be considered as an isolated event. Whether the overdraft was the result of a problem with a direct deposit, forgetting to transfer money into the checking account, or a higher than normal automatic payment, giving as much detail as possible about the event can assure the bank that it won't happen again and the overdraft fee should be reversed.

Talk About your Relationship with the Bank

You may have been with your financial institution for ages, but even the most loyal customers will leave their bank if they feel they are being treated unfairly. Use this implied threat and remind your bank of how long you've been with them and how much you've enjoyed the relationship. If you and other family members have a long history with the bank and you haven't had any overdraft fees before, your case for a refund will be even stronger. If the bank is afraid of losing you as a customer, it may be willing to waive the fee.

How to Explain Overdraft to an Underwriter

What Is a Bank Adjustment?

The Basics
Saving
By: Stephanie Faris

How to Open a Bank Checking Account With Bad Credit

What Happens if You Can't Pay an Overdrawn Bank Account?

What Happens When You Put a Stop Payment on a Check?

The Basics
Saving
By: Elizabeth Greenleaf