A customer who leaves her bank account alone for an extended period of time may find a nasty surprise when she eventually tries to claim her funds. Banks can declare accounts dormant after a period of time documented in their account agreements with customers, and eventually the accounts can be declared inactive by the state. The former situation can cost you money in added fees, while the latter complicates the effort to reclaim your money. 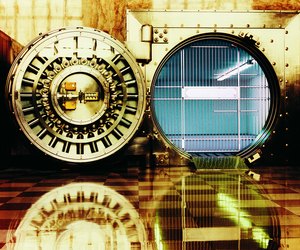 Dormant accounts are defined by the individual bank. Often, banks consider accounts dormant after six months to one year of inactivity, meaning no transactions have been processed against the account in that time. This may be more or less time than what the state defines as an inactive account. Banks set their own rules regarding dormant accounts and can charge a fee to maintain them, according to their agreements with account holders, until the account becomes inactive.

The length of time it takes accounts to be declared inactive depends on state law. While dormant accounts reflect internal status within the bank, inactive accounts reflect their status with the state. Once an account is inactive under state law, the state controls what the bank can do with the funds and may prevent or limit banks from diminishing the account further. States find out about these accounts through required bank filings or during audits. For smaller accounts, banks may close dormant accounts and send a check to the last known address prior to the account status.

Banks have to make an attempt to contact the customer of an inactive account, such as by writing to the account holder's last known address. If contact can't be established, control of the assets is turned over to the state. States make their own rules about when an account is considered inactive or unclaimed, but the typical period is three to five years.

Once the bank turns the account over to the state's unclaimed property division, the state then becomes the custodian of the account through a process known as escheatment. It attempts to contact the owner though such means as searchable website databases or public notices in newspapers. After the required period specified by state law, the state sells any securities in such accounts in accordance with state laws and treats the proceeds like any other state funds. It will return the cash value of the accounts at the time of the escheatment if the owner makes a valid claim. However, states rarely include the value of any interest or dividends set to be paid after the escheatment.

A bank must disclose its process for defining and handling dormant and inactive accounts when you open an account, and alert you any time the rules change. Your state policies on inactive accounts also are matters of public record and can be found on each state government's website -- often under the banner of the state controller, treasurer or banking authority. Reviewing those two sources should tell you how to reactivate your old accounts and reclaim your funds. Contact your state's unclaimed property office to find any databases that list those with unclaimed property and the procedures for reclaiming such funds.

The Basics
Saving
By: Keith Evans

What Does a Hold on a Bank Account Mean?

The Basics
Saving
By: Neil Kokemuller

How to Find Unclaimed Money in Any State

My Checking Account Has Been Given to Loss Prevention