How to Calculate Interest Rate Per Annum

When you're taking out a loan, you want to make sure you're getting the lowest interest rate possible. Or, if you're going to be earning interest, you want to make sure you get the highest rate. However, interest rates may be listed using a different time period than annually such as 0.75 percent per month or 1.6 percent per quarter. To compare those rates, you need to convert them to an annual rate. You'll also need to know how interest is compounded on the account. If interest is only added to the balance once per year, you can use the simple interest formula. However, if interest compounds each period, meaning it's added to the balance at the end of each period, you'll need to use the compound interest formula. 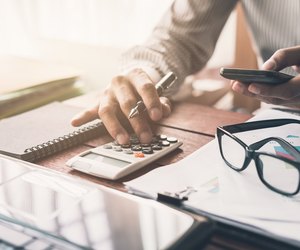 How to Calculate Interest Rate Per Annum
credit: kitzcorner/iStock/GettyImages

The compound interest formula is more complicated because it takes into account the impact of interest compounding, which refers to the fact that when interest is added to the account after each period, that interest incurs additional interest for the rest of the year.

To convert a periodic rate to an annual compound interest rate, convert the periodic interest rate to a decimal. Then, add 1. Next, raise the result to the power of the number of periods per year. Then, subtract 1. Finally, multiply by 100.

How to Convert an APY to a Monthly Rate

How to Calculate Simple Interest vs. Amortized

How to Calculate Interest Income

How to Calculate Mortgage Interest