What Is the MICR Line on a Check?

Magnetic ink character recognition, or MICR (pronounced MICK-er), is a technology used by banks to make the processing of paper checks easier. The MICR line is a row of numbers and characters at the bottom of a paper check. Those characters provide information about the account the check is drawn on. 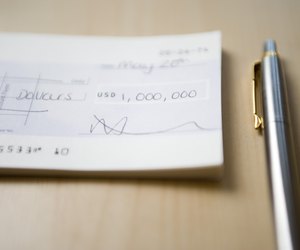 The first set of numbers in the MICR line is the nine-digit "routing number." This number identifies the bank that hosts the account the check is drawn upon. The routing number is surrounded by two identical symbols that look something like this: "|:" — a vertical line followed by a colon.

The second set of numbers in the MICR line is the individual account number of the person or entity that wrote the check. Unlike with the routing number, there is no uniform number of digits in the account number. It may be 5 digits long, it may be 10, or it may be something else. Every bank has its own procedures for numbering its accounts.

The third group of digits on the MICR line -- and the last group on a check that has not yet been processed -- are the check number. It matches the number in the upper right-hand corner of the check. If it's check No. 200, the number might be "0200," or even "00200." During the check clearing process, another number gets added to the end of the MICR line: the amount the check was made out for.

MICR lines are printed using special magnetized inks. Automated equipment at banks, Federal Reserve check-clearing centers and other sites read the MICR line, which identifies exactly where the money to pay the check will come from. Because of the special ink and its potential for bleeding and distortion, checks can't be printed on just any paper. They have to be on paper made specifically for checks.

The Stanford Research Institute first introduced the MICR line to the American Bankers Association in 1956. Up until that point, there was no universal banking standard for tracking checks. Often, individual banks would have their own systems completely different from those of other banks, which created confusion when a check from one bank was deposited into an account at a different bank. In 1961, the Stanford Research Institute received a patent for the MICR line, and by the middle of the 1960s the use of the line on checks was universal in American banks.

How to Identify Bank Numbers on Checks

The Basics
Saving
By: Erin Moseley

How Does MICR Work?

The Basics
Saving
By: Keith Evans

The Basics
Saving
By: Linda Batey

What Is a Personal Check?

How to Find a Bank's Tracking Number on a Check

The Basics
Saving
By: Emily Weller