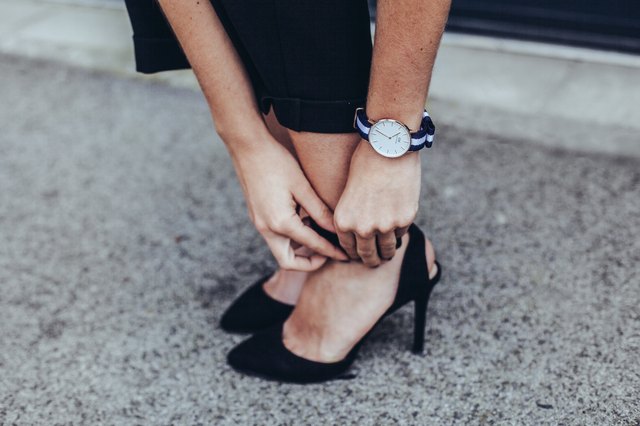 It may come as a surprise but in some places women are still forced to wear high heels to work. Well, last week in the Canadian province of British Columbia, a law was passed banning that kind of mandate. A British Columbia government website announced the decision saying, "The requirement to wear high heels in some workplaces is a workplace health and safety issue. There is a risk of physical injury from slipping or falling, as well as possible damage to the feet, legs and back from prolonged wearing of high heels while at work."

This whole controversy really kicked into gear in Canada last year when a photograph of a woman's excessively high heels went viral — she said she had been "berated" after changing into flats and told heels were a requirement for her restaurant server job. She was forced to continue working in heels even though her feet were bleeding.

The issue is not just specific to Canada. In the U.K. last year lawmakers determined that women were not protected against potentially damaging and discriminatory workplace uniform rules, particularly with respect to footwear. Lawmakers concluded, "dress codes which require women to wear high heels for extended periods of time are damaging to their health and wellbeing in both the short and the long term in the U.K."

In the U.S. Samantha Power, the former U.S. ambassador to the U.N., tweeted in response to the U.K. story saying, "The next petition should be one requiring men to wear high heels for a 9 hour shift before they insist women do." In New York City in December 2015, the city's Commission on Human Rights determined that it would it could be a legal violation to create gender-based clothing requirements in the workplace.

While it's maddening to think that women are still being told they must wear heels in the workplace, it's heartening to hear that governments are now stepping forward to bar that practice. So, if you find yourself being told you must wear heels to work, look into it: The law might be on your side.