The Salary of a Calligrapher

Calligraphers are fine artists who use their talents to create new fonts and scripts. Their work appears on company logos, invitations, books and are artistic achievements in their own right. Calligraphers, like other artists, see their earnings vary a great deal, depending on the projects they do: Many only do the work as a side job to supplement their regular income, but those who do it full time in general earn average salaries. 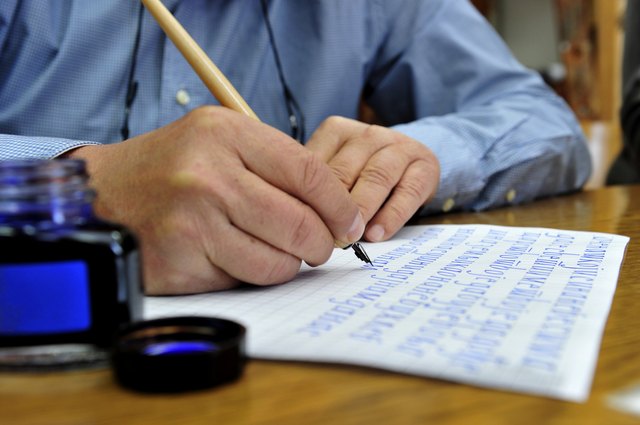 A calligrapher works on a project.
credit: schafar/iStock/Getty Images

In general, average calligraphers' salaries are tricky to pin down, as they often aren't salaried employees; rather they earn a commission on each project that they do. These projects vary in scope greatly and some artists do not have a regular, steady stream of work. However, an annual income of $53,080 was a rough average for the year 2010, according to the Bureau of Labor Statistics.

Calligraphers who want to maximize their earning power should consider looking for jobs in the western U.S.: In 2010, fine artists, a group that includes calligraphers, made more than $71,000 on average in New Mexico, the state with the highest wages for this group in the country. California wasn't far behind, paying an average of more than $66,000 to its fine artists. Indiana came in third place, with its fine artists making more than $65,000 in annual wages on average.

Calligraphers work individually to create writing styles that attempt to encapsulate a client's message or their own opinions. Many use old-fashioned tools of the trade, like authentic quills and individual inks, depending on the projects they are doing. Calligraphers must be dexterous and detail-oriented, with a knowledge of history and historical fonts and styles.

While some calligraphers can earn a living working full time, for many calligraphy is a hobby. Such enthusiasts may work purely for themselves, or hire themselves out for part-time and freelance work. Professional societies, like The Washington Calligrapher's Guild, work to connect calligraphers with their peers, as well as potential employers.

How Much Do Wildlife Filmmakers Get Paid?

Benefits & Salary of a Sports Commentator

The Average Salary of a Sports Photographer