Ping me to touch base on growth hacking, LOL. Did your shoulders just go up around your ears? You're not alone. Office buzzwords are an ever-present and evolving feature of any workplace, and we know which ones you tolerate in 2017 and which ones you downright hate.

The cloud computing firm Summit Hosting released data in September from a 1,000-person survey asking workers about corporate communication. The language an office develops internally not only affects its culture, but also its relationship with clients. The survey rated different phrases on how much they conveyed or earned respect, how much they annoyed listeners, and how they affected perceptions of intelligence. Some jargon has become normalized enough that it doesn't raise any hackles, but if you catch yourself using others, look out for wincing and grimaces. 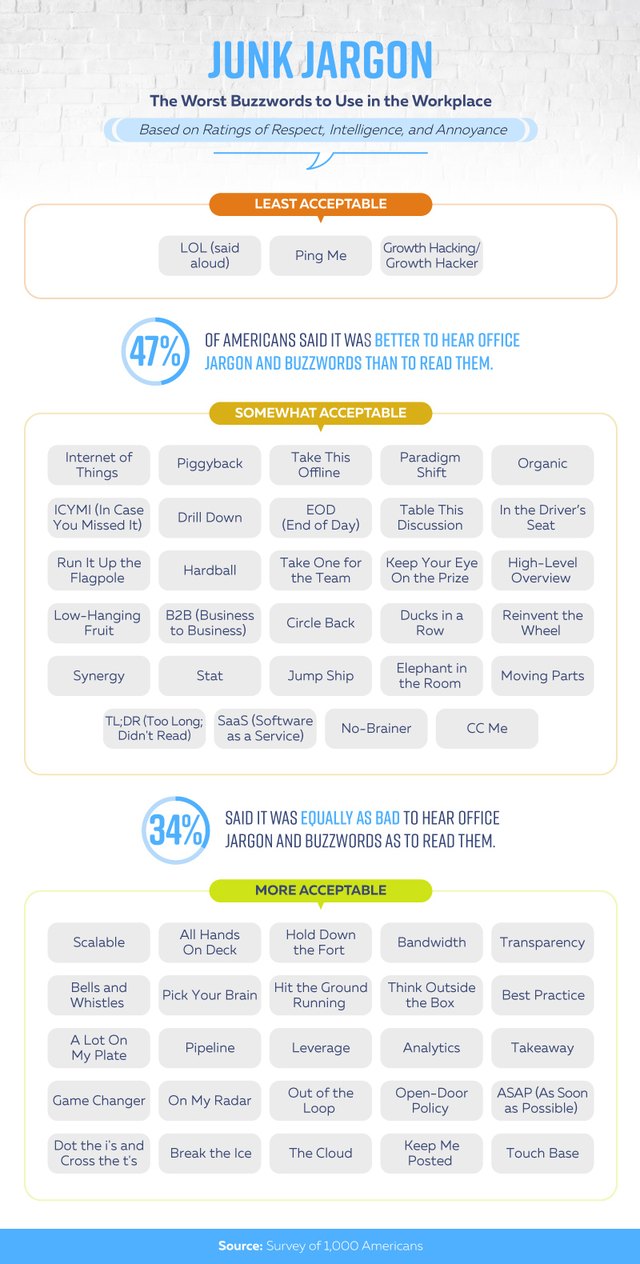 These results are flattened out across industries, but the survey does break down preferences among different types of workplaces. Science and tech employees hate to hear "LOL" spoken out loud, while legal professionals clench their fists at "the internet of things." Polarizing phrases in one sector may not grate so much in another; while "run it up the flagpole" is a faux pas in manufacturing, arts and entertainment workers don't find it annoying overall.

Nearly half of participants agreed that hearing buzzwords is better than seeing them written out, but 16 percent would prefer to do away with jargon altogether. Those respondents worry that buzzwords can be harmful to their career, and it is true that too much specialized language can silo a person and an industry. Office jargon has a place, but it also has a function. The moment it starts impeding useful communication, start thinking about how simply you could say what you want instead. The less time we spend decoding emails and conversations, the more we can put toward getting the job done.

How Two Words Can Improve Your Workplace Health

Office Decor Actually Has an Impact on Productivity

An Easy Way to Be Well-Liked Around the Office

3 Ways to Build the Office Culture of Your Dreams